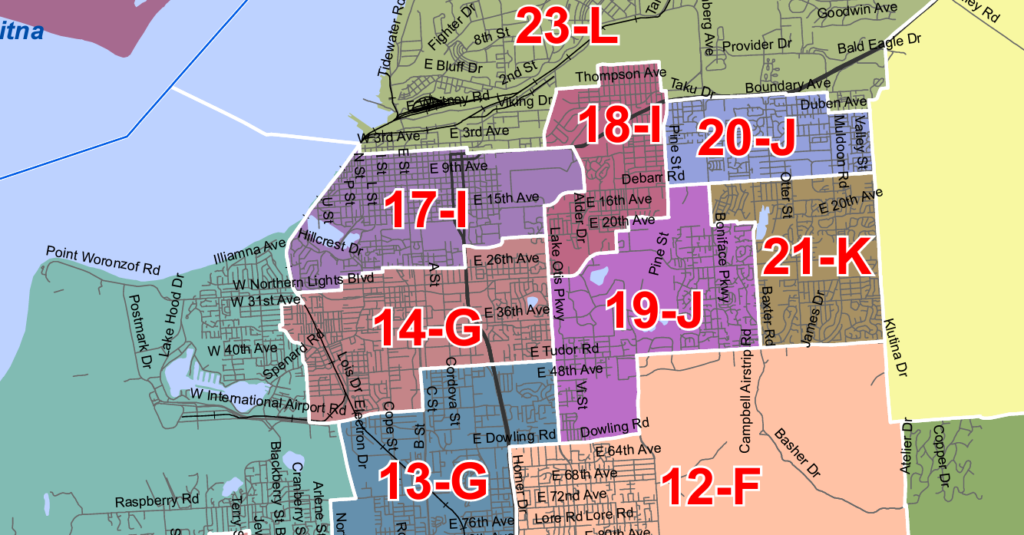 With the 2020 Census, new political boundaries had to be drawn to account for population changes around the state. Click on the map above to see the new maps.

Note: These maps are provisional until the current series of court cases wrap up later this spring.

The new maps are organized by region; Anchorage, Eagle River, Fairbanks, Kenai Peninsula, Mat-Su, Southeast. The region maps are followed by a statewide map and then the local district maps. Once you view the map corresponding with your region and see which districts are in your region, you can then look for the specific district map that corresponds to where you live.

Every Alaskan voter lives in a house district that corresponds to the legislator that is elected to represent them in the Alaska State House. There are 40 seats in the Alaska House of Representatives, and therefore forty district maps, one for each seat.

There are two reasons for you to become familiar with the new maps:

1) The 2022 November Election will be based on new maps (either these maps, or another version of these maps that results from the current lawsuits)

2) The political parties are already using these maps to organize themselves into district committees, region committees, statewide committees, etc.

Note: If the current series of court cases does move the new political boundaries any, I will replace these old maps with links to the new maps.

In the meantime, for better and for worse, you are stuck with the legislators you’ve got until after the 2022 election.