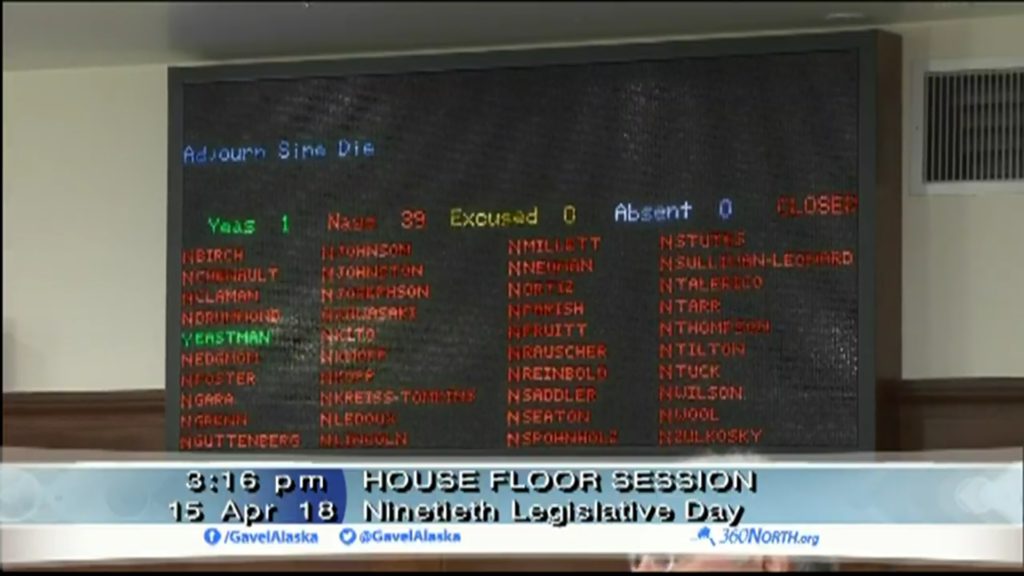 At the end of the 90th day of session, I voted to adjourn, in keeping with current Alaska State Law that requires the legislature to adjourn no later than the 90th calendar day.

As you can see from the picture above, that proposal went over like a lead balloon.

How does Alaska compare with other states?
During my first year in office, the Alaska Legislature was in session for 212 days—a new state record.

Last year, the legislature was in session for 217 days—another state record.

In fact, over the last two years, the Alaska Legislature has been in session for 110 days longer than the legislature in Texas, despite Texas having a population approaching 30 million.

Long legislative sessions involve a direct cost to the people of Alaska. The four special sessions during my first year in office directly cost the state more than $2 million dollars. However, the indirect expenses, the costs of all of the bad legislation passed during times when the legislature would not normally have been in session, are almost incalculable.

Also difficult to calculate is the impact that these never-ending sessions have on the caliber of our legislators themselves. Longer sessions mean fewer Alaskans can juggle the demands of holding down a job and also serving in the legislature at the same time. For many legislators, and those who work in the legislative branch, longer sessions mean time away from not only their regular employment, but also time away from family.

Unfortunately, rather than change the 90-day session law, which the legislature has the power to do at any time, legislators have chosen simply ignore it.

Silver Bullet Solutions
Historically, when more commercial fishermen were serving as legislators, those that did not participate in commercial fishing possessed a distinct advantage over those that did. By putting off key votes until the start of fishing season, the livelihoods of fisherman could be leveraged against them.

Legislators today behave much the same way. Laws which could never garner enough votes to pass in the first 90 days of session suddenly have a chance to pass once they make it past Day 90. Citing their own failure to follow the 90-day session law, many legislators justify giving less scrutiny to bills that pass towards the end of session on the grounds that they are pressed for time.

Alaskans are justifiably offended that the legislature would behave in this manner, and have proposed various penalties for legislators; ranging from withholding legislator salaries, to removing them from office, to reducing or even eliminating the per diem that covers the high cost of living expenses in Juneau.

However, all such punishments, if applied to all legislators indiscriminately, will be used by some legislators against other legislators, just like summer sessions were used against legislators involved in the commercial fishing industry in times past.

In fact, the more likely outcome is that any such penalty will simply be used by wealthy, retired legislators to coerce legislators who still maintain a livelihood outside the legislature, which will simply make the problems in Juneau even worse.

Continuing to ignore Alaska’s 90-Day Session Law is not an acceptable solution. Legislators should pass legislation to remove the possibility of endless special sessions in Juneau.

In times past, I proposed House Bill 371 to prevent the governor and future legislatures from repeatedly calling back to back special sessions in Juneau, a process that led to the legislature being in session for 217 days last year. This year I will be putting forward the Bring Legislators Home Act to eliminate the incentives for legislators to continue to ignore the 90-day session law with impunity.