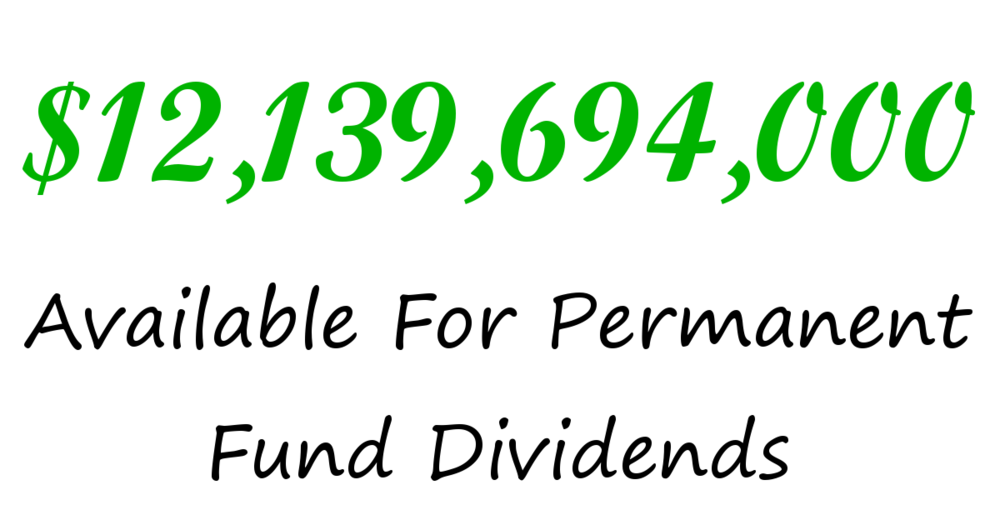 The legislature broke a record yesterday. Actually, they broke more than that: they broke a law. While the funds available to pay the Alaska Permanent Fund Dividend have never been higher (currently $12 billion, though the exact figure fluctuates day to day), for the first time in Alaska’s history the legislature has attempted to ignore the PFD amount set in state law.

Alaskans will remember that the governor attempted to ignore the amount of the PFD last year through a gubernatorial veto, but yesterday was the first time ever that legislators have also taken that ominous step. In the budget currently before the governor, a PFD calculated to be $2,280 will only be funded at $1,100. And the governor has already asserted the power to reduce that amount even further.

If he has the right to change the amount of the PFD, he could choose any lower amount: $1,000. $500. $100. Or perhaps he (or a future governor) simply object to the PFD on ideological grounds or believe that economic conditions don’t justify a PFD in a particular year. In that case, the PFD could be $0.00

But let’s not get tunnel vision on the specific amount that the governor comes up with this year. I believe the bigger issue is power. You see, anytime a politician (a governor or a legislator) decides to set aside a law for the first time, the people should immediately recognize that as a grab for power. It is a grab for power, even if they don’t take the formal step of actually exercising that power.

State laws don’t just exist to allow prosecutors to put criminals behind bars. Some laws have no penalty for breaking them. In a society where the rule of law is valued, laws also serve the fundamental purpose of establishing correct public expectations for behavior. In such a society, you can rightly make decisions based on what is written in state law and the expectation that state officials will follow it. That is, until a lawyer is elected president, in which case, even the meaning of the word “is” is up for debate. But setting aside President Bill for a moment, let us consider the consequences of the legislature’s action yesterday.

State law provided a consistent calculation for the PFD from year to year. That calculation not only provided a predictable outcome, more importantly, it removed politics from the equation. In asserting the power to change the PFD, the governor, and now the legislature, have taken what was a math problem, and have now made it a political problem. And politicians love political problems.

A math problem offers nothing to a politician, short of an opportunity to spin the numbers in a way that suits them. A political problem, on the other hand, offers a whole range of possibilities. Laws limit power. Being able to break (or ignore) those laws gives a politician freedom of movement. Freedom to do something is the freedom to trade and negotiate with others about whether you will do it or not do it.

Perhaps you don’t personally care much about the value of the dividend but a legislator from another part of the state does. In exchange for a higher dividend, which the other legislator’s constituents care about, you have the opportunity to gain support for something you care more about (maybe a dam, maybe a pipeline, maybe killing the dam, or blocking the pipeline). And now that the legislature no longer feels constrained by the calculation in state law, tell me, what is the upper limit on the PFD?

This year’s legislature wants to cut the PFD. Perhaps when a different party comes to power, a future legislature will want to increase it. The mechanism of the PFD, detached from law and historical practice, offers the ability for politicians to give something to each and every voter in their district. I bet you can buy a lot of good will with $12 billion. $17,000 PFD anyone?

And why in the world does the Earnings Reserve Fund stand at $12 billion today? One reason is because of another law that the legislature has seen fit to ignore. Alaska Statute 37.13.145 deals with the PFD and also spells out the method for calculating inflation-proofing for the permanent fund itself. Per state law, that amount is to be transferred to the permanent fund itself each year. This year, as in past years, the legislature voted against permitting that transfer to take place. Instead of honoring the calculation set in statute, the legislature set that number aside and inserted a different number in its place.

When politicians assert the power to set aside a state law, they cannot do so without silently asking permission from the people. After all, state laws were passed on behalf of the people. In a very real sense, they belong to the people. If there is no legal penalty for breaking a particular law, the penalty will be a political one. But if the people are simply going to return to power those who have gotten around the law, there may be no penalty at all.

This is not to say that there will be no consequences. Whether we support the PFD or not, each of us will now be forced to live with the consequences of a thoroughly politicized PFD. Our elected officials have asserted that the PFD should now be a political question, and should be handled the same way that other political questions are handled, by the politicians. Alaskans should see this for what it is: a request for more power.

If you believe those in the capitol have been doing a great job, perhaps they do deserve a bit more power. Or not. But no matter what you or I might think, until the people decide at the ballot box, it’s an open question. Just remember, if the people will not stand up for their own laws they should not look to someone else in government to do it for them.

In the meantime, this legislature will go on setting new records and pushing into new frontiers. We are already at 158 continuous days of legislative session this year with no sign of stopping. We’ve already past last year’s total, as well as the year before, and we haven’t even made it to July yet!