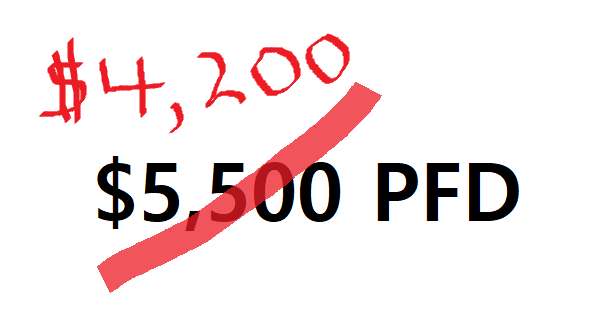 It is currently being reported at the State Capitol Building that Governor Dunleavy intends to pull out his big red pen and veto a portion of this year’s PFD in response to concerns from legislators that the amount for the dividend passed by the state senate is too large. While the governor has made no official announcement, as I pointed out this morning, there is a very real possibility that he could veto part of this year’s dividend.

Article 2, Section 15, of the Alaska Constitution is the section that Governor Bill Walker used to justify his unprecedented veto of the PFD in 2016. It reads:

The governor may veto bills passed by the legislature. He may, by veto, strike or reduce items in appropriations bills. He shall return any vetoed bill, with a statement of his objections, to the house of origin.

Of course, a governor has no authority to veto a state law, such as AS 43.23.025, the law which calculates the amount of the PFD each year.

However, the amount of the PFD in this year’s budget is actually greater than the amount set in statute, so the governor would not technically be breaking the law by vetoing a portion of it.

Another reason he may use to veto part of the PFD is that the full, statutory PFD amount approved by the state senate is also larger than the amount the governor asked for in this year’s budget.

In his initial budget, Dunleavy only asked legislators for a $2,550 dividend, which is a bit more than half (60%) of a full, statutory dividend. If this year’s dividend were calculated according to state law, it would be $4,200.

So, here is where this year’s dividend stands currently:

According to state law, the amount of this year’s permanent fund dividend should be $4,200.

The state senate approved the full statutory amount of $4,200, plus an additional $1,300 which the budget describes as a “one-time energy relief payment.”

All told, the amount for the PFD in the senate budget is $2,950 higher than what was included in the house version of the budget.

But if Dunleavy uses his veto pen to reduce the dividend down to the amount that he originally requested in this year’s budget, $3,750, the difference  between the house and senate dividend amounts drops to only $1,200.

These are the numbers at play in the legislature today.

While it can be a challenge to follow all of the numbers above, I have spelled them out here so that you have the opportunity to understand where the battle lines have been drawn. Yes, legislators can vote to approve the senate budget, which includes a $5,500 dividend, but the dividend you actually receive in October will be quite a bit less than that if the governor vetoes a portion of the dividend after it has been passed by the legislature.

Absent information from the governor on what he intends to do, legislators and members of the public should consider the very real possibility that adoption of the senate version of the budget will result in something less than the $2,950 dividend increase that many Alaskans are currently hoping for.

As the battle for the dividend continues in the Capitol Building, please join me in asking the governor to protect whatever dividend amount is passed by the legislature. There are many parts of this year’s $17 billion, 186-page budget that he can veto. For the sake of Alaskan families, the permanent fund dividend should not be one of them.

To put this year’s dividend in context, if the senate budget passes the legislature, and the governor allows the $5,500 dividend to remain unchanged, that will only account for $1,300 of the $9,691 that the legislature has withheld from dividends over the past six years. The chart below provides a short summary of withheld dividends since Gov. Walker vetoed the first dividend six years ago.

Now is the time to call. By next week, the amount appearing on dividend checks will have already been decided.