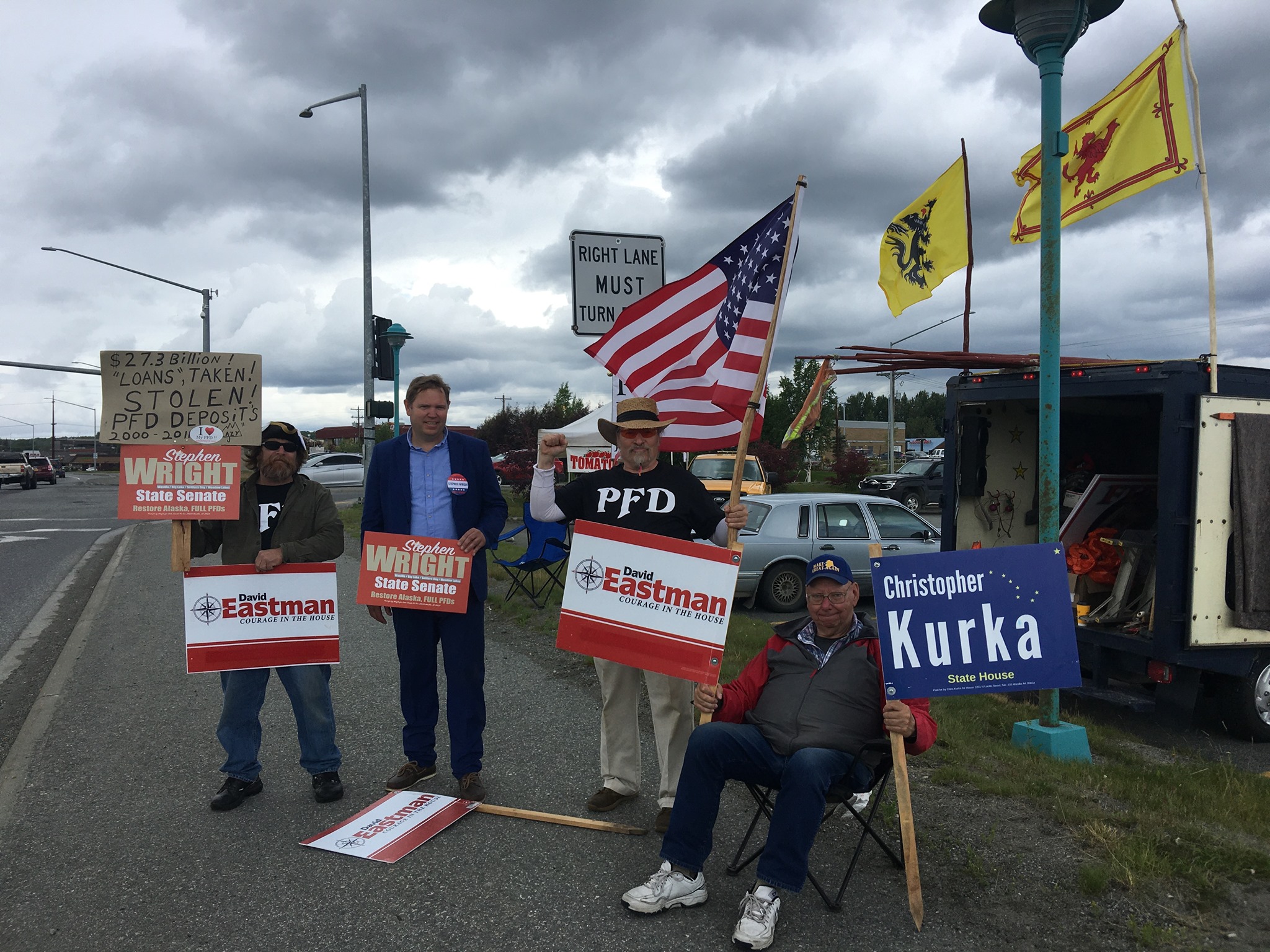 (Conservatives Sign-Waving on the Parks Highway in Downtown Wasilla, 7/11/20)

We’re one week out from Election Day. The recent attack against conservative candidates in the Mat-Su is so brazen, and was begun with such a cold-blooded lie, that it will change the way some conservatives look at Alaska politics for good.

When Anchorage Republicans, and their friends in DC, pull out Nancy Pelosi’s Playbook to target local Mat-Su races, I take notice.

To date, I haven’t had anything to say publicly about any of the various races in the Mat-Su other than my own. Today I would like to change that and come down 100% in support of the two Mat-Su candidates who have also been targeted by Anchorage and DC.

Starting today, LD Howard and Christopher Kurka are both welcome to use my name in an endorsement. We need Mat-Su legislators who will stand up for the Mat-Su, not legislators beholden to Anchorage, who happen to have a mailing address in the Mat-Su.

When you can’t turn on the radio or open the mailbox without seeing ads from Anchorage and Washington D.C. in local Mat-Su races, people take notice.

When associates of Lisa Murkowski are involved, people take notice.

When you have half a dozen legislators representing parts of Anchorage going door-to-door in the Mat-Su trying to convince conservative voters to choose “better” (i.e. more closely aligned with Anchorage) legislators in the Mat-Su, people tend to notice.

Today, that agenda is focused on ensuring that control of the state house passes to a Binding Caucus run by a legislator from Anchorage.

Even so, individual legislators, with a demonstrated ability to help the Swamp “get things done”, are rewarded quite handsomely by Anchorage (in this case George Rauscher was awarded at least $19,325 in campaign support, Lynn Gattis received at least $29,550, and my own opponent received no less than $53,000, including support from unions).

In contrast, Mat-Su legislators who advocate for a better way than the Binding Caucus—are punished—repeatedly. Conservatives in the Mat-Su know this all too well, and none more so than the constituents I represent in Juneau.

When our senator, Mike Dunleavy, signaled he would advocate for the Mat-Su rather than help Juneau “get things done”, he was expelled from the Binding Caucus, his staff were summarily fired, and he was forced to move out of his office in the Capitol Building, along with numerous other indignities.

The Mat-Su had to be brought to heel.

When his successor, Mike Shower, also refused to vote against his constituents, he too was declared persona non grata by Juneau. He was stripped of staff, stripped of committee assignments, and cashiered as Chair of the Armed Services Committee, despite the fact that he has spent more time serving in the military than all of his senate colleagues—combined.

As I currently represent the majority of those same Mat-Su constituents Sen. Shower serves, and Sen. Dunleavy served before him, I have experienced the same contempt from those in Anchorage and Juneau.

That contempt is now on full display in the current election cycle. So much so that, rather than focus on Democrat opponents, Republican legislators representing various parts of Anchorage are focused instead on helping rural Mat-Su voters find themselves better representation.

Once my opponent announced he was running, they even took the extra step of using state resources to publicly address Mat-Su voters on the floor of the House of Representatives and encourage them to consider voting for someone else in the next election. Illegal? Yes, but when you are speaking on behalf of the Swamp, Juneau doesn’t keep track.

I grew up in a conservative family in Ronald Reagan country. In high school, we would take field trips to the Reagan Presidential Library. Two weeks after graduating from high school, I started at West Point and from there was stationed at JBER. Today, I’m a conservative legislator representing a conservative district in the heart of the Mat-Su. I don’t have to pander to voters in my district. It’s a match.

By the way, in most cases the Swamp doesn’t care how legislators campaign. It cares how they vote.

And for years it has taken for granted that Mat-Su legislators will continue selling their votes to a Binding Caucus dominated by legislators from Anchorage.

At the start of last year, my senator and I were the only two Alaska legislators with a 100% lifetime conservative voting record. Up to that point, we also shared the distinction of never having voted as part of a Binding Caucus. Those two things go hand in hand.

The idea that Mat-Su legislators might stop selling their votes to the Binding Caucus is the single most terrifying realization facing the Swamp this election cycle. It’s terrifying enough for those in Anchorage to reach out to D.C. for support in upending local house races in the Mat-Su.

There are six solidly conservative house districts in the Mat-Su (it will be seven after redistricting). Once conservative legislators no longer have to live in fear of the Binding Caucus, they will have greater freedom to represent their districts, and I will no longer be the only elected house legislator with a 100% conservative voting record.

That reality has shaken the Swamp to its core today. You see, the Swamp is perfectly OK with legislators campaigning as conservatives, and talking about protecting the PFD. But the idea of legislators consistently voting that way in Juneau would drain the Swamp of much of the power that it wields today.

Some of that power would then come back to the Mat-Su.

And this is why both Juneau and Anchorage have something at stake in the Aug. 18th Mat-Su house races.

It’s also why the Swamp has been willing to burn some of its conservative allies in its effort to hold onto power.

The RSLC in D.C. just sent $150,000 to Anchorage Republicans, ostensibly to help Republicans retake control of the State House from Democrats. Surprisingly, the money is going to the family of an Anchorage legislator jockeying to be Speaker of the House next year, and instead of the money being used to beat Democrats, the lion’s share is instead being used to try and beat the three most conservative candidates in the Mat-Su Valley. That type of attack doesn’t happen on the spur of the moment. It was calculated. And it’s straight out of Nancy Pelosi’s DC Swamp playbook.

The attack began on the Floor of the Alaska State House on March 5th with a public request for Mat-Su voters to reconsider who they keep sending to Juneau. The signal was clear: Attack. The smear followed on June 11th.

As Pelosi explains, part one of the smear is to place a complete fabrication in a local media source so that it can later be pointed back to for “verification”. The smear, which has no credibility of its own, as it is entirely false, borrows from the credibility of the media outlet in order to gain traction.

Must Read Alaska was the media source that lent its credibility to the smear by publishing such gems as “Some Democrats actually vote more conservatively than Eastman.”

Conservatives should realize that when those in Juneau drop such an incredible smear, it actually serves a dual purpose.

First, the lie is planted in hopes that it will grow and undermine their political opponents. Second, it’s an excuse to pull out the popcorn and mock any individuals who actually believe it.

No joke. When regular people stumble across the lie and take it at face value, it just serves as confirmation to those in Juneau of their own superiority, and validates their deeply held belief that people who are so ignorant as to believe such a tall tale clearly have no business interfering in the affairs of government.

Yes, Juneau has contempt today, not just for conservative legislators, but also for the majority of Alaskans. Take for example this observation from the last legislative session which garnered 50 likes from those in and around the capitol building.

Overheard in the Capitol, "I just met with my legislator and I really think I made a difference!" Bless that person lol. #akleg

And we wonder why most Alaskans steer clear of Juneau and the Capitol Building altogether. But, I digress.

While an excuse to pull out popcorn is a second purpose, the principal purpose of a smear is simply to attack one’s political opponents. Consequently, political media outlets who participate in outlandish smears like the one on June 11th above, don’t do so on accident.

My voting record in Juneau is well known. It was no surprise that the Democrats ranked me “The Worst” (literally) of all legislators, or that the Alaska Policy Forum ranked my voting record the best.

We also know the smear was not an accident because the same media outlet that published the smear had previously written an article comparing my voting record to that of my peers, demonstrating that the smear wasn’t even remotely true. Even so, the smear served its purpose.

In this case, it was not only rebroadcast by my opponent to try and generate traction for his campaign, but it was also broadcast Outside to convince groups like RSLC to sign off on investing large sums in Mat-Su house races. The challenge wasn’t in getting the money to Alaska, but in diverting most of it to state house races where Republican were already certain to win, and that have absolutely nothing to do with that organization’s stated goal of fighting against socialism. That must have required some very creative salesmanship.

Will your next state legislator be selected by Anchorage, and based on whether or not they are supporting a certain Anchorage legislator in his bid to run the State House? That’s a real question for some Mat-Su voters. Meanwhile, Anchorage-based groups like AFP, AFC, Anchorage Young Republicans and others are already pulling for the Anchorage-backed candidates.

In the Mat-Su, the battle lines have been drawn.

On the side of Anchorage and the Binding Caucus you have:

On the side of the PFD and ending the Binding Caucus you have:

Who will you choose?