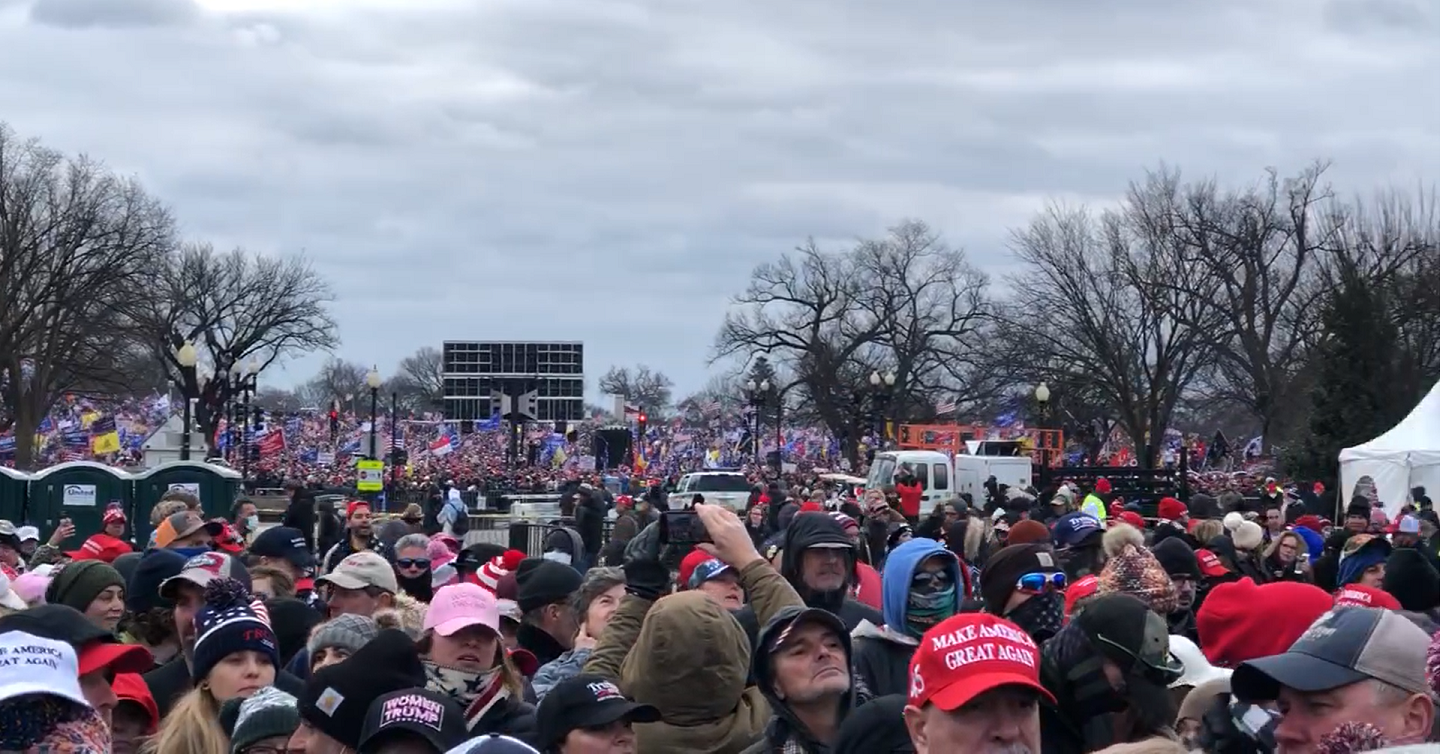 (Tightly Packed Crowds stand in line to hear the president speak near the White House on January 6, 2021)

I have had the privilege of being in Washington, DC on January 6th twice. Each time, it was an immense privilege to stand shoulder to shoulder with Americans who were willing to sacrifice personal safety for the future of this country.

I would like to have attended the Armed Forces Farewell Ceremony for President Trump. Unfortunately, as 2020 was drawing to a close, the Pentagon chose not to announce a date for the event.

My first visit to DC in January was to help organize the presidential inauguration of Barack Obama and Joe Biden. It was exactly thirteen years ago today that Barack Obama stopped by our office for an unannounced visit to greet the troops. I never voted for the man, but I was incredibly grateful that he broke with tradition and came by to shake hands with the hundreds of military servicemembers like myself who were putting in the long hours to help make his presidential inauguration a success.

As one of the planners, I had front-row seats to the multitude of tasks and seeming endless ceremonies that accompany the transition from one president to the next. Frequent meetings with the Capitol Police, the Secret Service, the FBI, and other agencies helped ensure that the inaugural events in and around the DC area went off without a hitch. For me, Inauguration Day started shortly before 2am as I walked from my apartment to the Pentagon to help organize some of the 15,000 participants in the Inaugural Parade.

Having watched and been a part of the months-long preparation that goes into pulling off the parade, it was with sadness that I heard the news on January 3rd that Joe Biden had decided to cancel the inaugural parade. Separately, it was also announced that the public would not be invited to the presidential inauguration itself, which would instead be limited to elected officials, much like a State of the Union. Of course, each of these decisions followed a decision made early on by the Biden administration to pretend that irregularities in the 2020 election simply did not exist. No farewell ceremony. No inaugural parade. No public attendance at the inauguration ceremony itself. Pretend that irregularities in the 2020 election did not exist.

It was with this as a backdrop that I began making plans to fly down from Alaska to visit Washington, DC. I had never worn a MAGA cap or been to a Trump rally (his normal speaking circuit doesn’t usually include places like my home state of Alaska), but I knew that I would want to tell my kids and grandkids one day that I had been to DC to hear the president speak in person when the chips were down and he had asked Americans to come to Washington, DC and be counted.

Like millions of Americans who contemplated going, we knew it would be cold (It’s always cold in DC in early January). We knew that the political class currently running our country wanted nothing to do with us or with the president, and that they certainly didn’t want us showing up to hear him speak after they had publicly declared him persona non grata. We knew they didn’t want us taking an interest in the vote that would be taken in Congress on January 6th to certify the presidential election. The messaging was clear: There will be no investigation into the 2020 election. There is nothing to object to, and any member of Congress who raises an objection to immediate certification will risk the same treatment that was meted out to other election officials who objected to immediate certification in their states.

It was a narrative that many of my constituents rejected, especially after it was announced in December that our state division of elections had been hacked prior to the election. Shockingly, the data breach, which involved a substantial number of the voters in my state, was not disclosed to the public, or to candidates, until three days after the election had been certified. Even so, we are told that an audit of our state’s election is unnecessary, and may even be dangerous.

As I have explained elsewhere (See “Trump Lost and Jeffrey Epstein Killed Himself“), normal truths may be challenged, but a political truth is something entirely different. It must never be challenged. Like a formal declaration about the safety and effectiveness of a brand-new, government-mandated vaccine; it must be assented to regardless of whether you or anyone you know actually knows whether it is safe or effective. It may be safe and effective. It may not be. That’s not the point. Assent is.

I did not assent to a political narrative about the election that is utterly uncompelling. I never have. Many of the voters I represent never have. They deserved to have a representative in Washington, DC on January 6th when the votes for president were being counted. After arriving in DC, I called upon each of my members of Congress to give voice to the concerns that I was hearing as a state legislator. With representatives in Congress like Lisa Murkowski and Don Young, that message wasn’t warmly received, but I delivered it just the same.

And so, the next morning, I found myself standing shoulder to shoulder with half a million or more Americans waiting to hear the president speak, while the voice of Lee Greenwood echoed the sentiment of many in the crowd: “And I’ll gladly stand up, next to you, and defend her still today, ’cause there ain’t no doubt I love this land—God Bless the U.S.A.”

What did it mean to be in DC on January 6th? It meant being one of only a few from my state who had the opportunity to answer the call of the president and physically stand with him in his final days in office. For me, it meant thanking him for each of the times he had stood up for the American people, and doing so in a way that would be meaningful to him. Many more would have come from my state if timing, distance and weather had been more favorable. Being at the Ellipse and hearing the president speak meant not just standing with the president against the DC mantra of “Orange Man Bad”. Just as important to me, it meant standing shoulder to shoulder with thousands of men and women of courage who love this nation and are still willing, when the chips were down, to stand and be counted for that love. And we are. As a veteran, it meant being present for a farewell to the president that the Pentagon had denied him.

For many of us, perhaps even most of us, it meant a willingness—not an invitation, but a willingness—to take a political beating, if not a physical one, just for attending. We had all watched, month after month, as the powers that be stood by while activists from the Left torched cities and preyed upon stragglers leaving Trump rallies in various parts of the country. The message was clear: Attend a Trump Rally in a Democrat stronghold at your own peril. Even so, when the president asked them to come, they came.

True to form, the Left maligned those who came. Whether they were law-abiding or engaged in violence, it made no difference. All were guilty by association. Even some of those who didn’t come, but were the type of people who would have, were accused. All were guilty of standing with the president. This has been used to justify the Capitol Police traveling all the way to Alaska to beat down the door of a Homer couple who attended Trump’s speech, even going so far as to confiscate their pocket Constitution as evidence against them. It has been used to overlook the mistreatment of many who were incarcerated in DC following the riots, opening up the U.S. to accusations from our adversaries that we are currently holding political prisoners, and leaving troubling questions for us all. Terribly, this has also been used to somehow justify overlooking the treatment of the two women who died that day; one beaten, and the other shot, despite the fact that neither woman appears to have engaged in violence. How profound that both of these events should receive such limited attention following months of wall to wall coverage highlighting concerns over police brutality.

Some will wonder why I don’t take this opportunity to bow the knee and further distance myself from the carnage that took place in and around the capitol building on January 6th. I have addressed attacks on law enforcement previously, but that is not my purpose today. Those attacks have nothing to do with what led half a million or more of us to travel to DC, and they have nothing to do with what it meant personally for me to be there. That’s someone else’s narrative. That’s their story. This isn’t about distancing myself from individuals I had no interaction with, but about the joy and privilege it was to stand with those I did interact with, both in 2009 and again in 2021.

It was a long slog from Alaska, and the expected political beating from the Left began even before I made it home—but traveling to DC to stand shoulder to shoulder with Red-Blooded Americans from every state in the union was absolutely worth it.

The America we know is under attack today, and those who stand by her will come under attack as well; from the least of us to the greatest. It won’t matter what political party you belong to, or where you were born, or the color of your skin. The crime will be standing by America in her hour of need.

To those looking to tear down this nation, and wondering who will oppose your efforts, I say “Put me on your list.” No matter what future God has in store for this nation, I mean to leave my children and my grandchildren no room for doubt as to my love for this great land—God Bless the U.S.A.