It’s quite the political conundrum.

In an earlier time of course, legislators could disagree with one another on a vote and that was thought to simply be part of the political process. But that was then.

Today, in 2022, we have a growing number of legislators for whom such disagreement is no longer logically possible. It’s impossible because they literally cannot conceive of a reason why any decent person could cast a vote against them and their virtue signaling. To vote against them is to be racist. And of course by that they mean “unacceptable”. And unless we want to risk being contaminated ourselves by their unacceptable thoughts, we must banish any racists from public office, and we must do so quickly if we are to avert the end of our democracy.

To allow politicians to cast unacceptable votes, even if those votes are hopelessly outnumbered, is to imperil the very future of society (Note: If this is starting to sound eerily like the mania which attended the Salem Witch Trials…you wouldn’t be the first person to notice the parallels).

Of course, more and more we see that what is called “racist” is simply anything (or anyone) who threatens the Democrat Party’s political agenda. And we saw a textbook example of that just this morning.

Today, the Alaska Legislature proposed to honor the life and accomplishments of Democrat politician Byron Mallott, describing him as a “noble leader“, “an extraordinary leader” and “visionary“.

As a father of three daughters, and on behalf of those I represent in the Mat-Su, I objected to this brazenly political whitewashing of some of the worst scandals to rock Alaska state government during my time in the legislature.

Byron Mallott oversaw the Division of Elections when more than 50 voters were encouraged to illegally cast two ballots each during the primary election, allowing Democrat Dean Westlake to defeat Rep. Ben Nageak by 4 votes.

No one was ever prosecuted. No one was fired. I am not aware of a single person even being reprimanded. Democrats cheered the results. The victory of Dean Westlake assisted Democrats in being able to take control of the Alaska State House for the first time in decades.

After serving less than 12 months in the legislature, Dean Westlake resigned from the legislature for sexual misconduct spanning many years and involving a 15-year-old girl. The legislator whom he defeated by 4 votes was never permitted to return to the legislature.

Three weeks before the next election, Byron Mallott resigned as lieutenant governor in perhaps the least transparent resignation of an elected state official in Alaska history. His running mate, Governor Bill Walker, withdrew from the race three days later (see “ProPublica: The Woman Propositioned by Alaska’s Former Lieutenant Governor Tells Her Story for the First Time“).

These are but two of the events that lead many of those I represent in the legislature to object to formally honoring Byron Mallott as an extraordinary and noble leader.

But remember, since dissent can no longer be tolerated, it did not end there.

Rather than allow me to maintain my objection, and be able to honor other Alaskans, including Senator Albert Kookesh (1948-2021), twenty-two legislators chose to hold my vote for Sen. Kookesh and other Alaskans hostage unless I agreed to vote for every word of praise that had been prepared for Byron Mallott.

Because I would not vote to praise Mallott, I was then publicly condemned for being…you guessed it…racist.

You can read for yourself each of the four citations that the legislature approved today, including the citation for Byron Mallott.

You can also watch the entire series of events as it unfolded on Gavel to Gavel here:

In red are the twenty-two legislators who voted to hold hostage my vote for Sen. Kookesh and the other Alaskans that were being recognized today.* 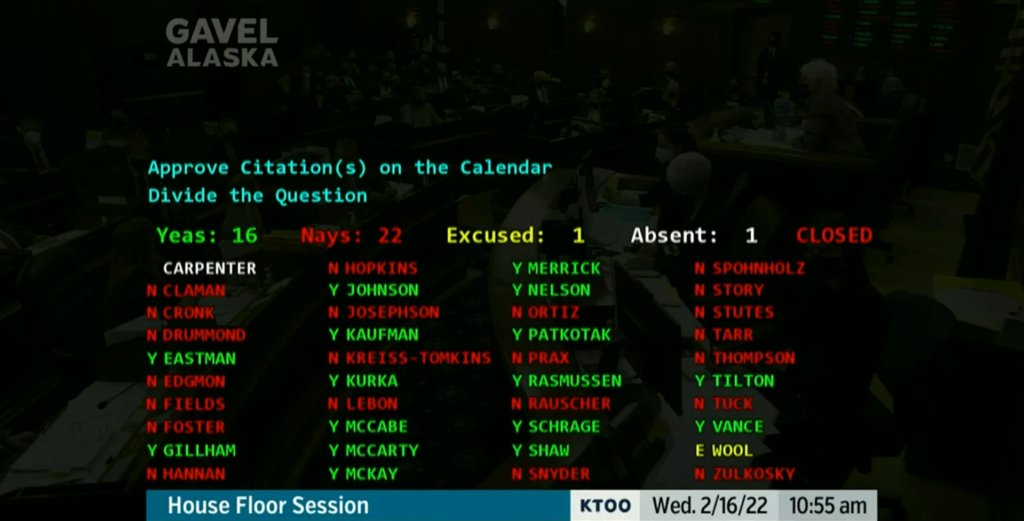 Thank you to Representative Rasmussen and Representative Kurka for not going along with the bullying, and for refusing to vote to declare Lieutenant Governor Mallott an extraordinary and noble leader. 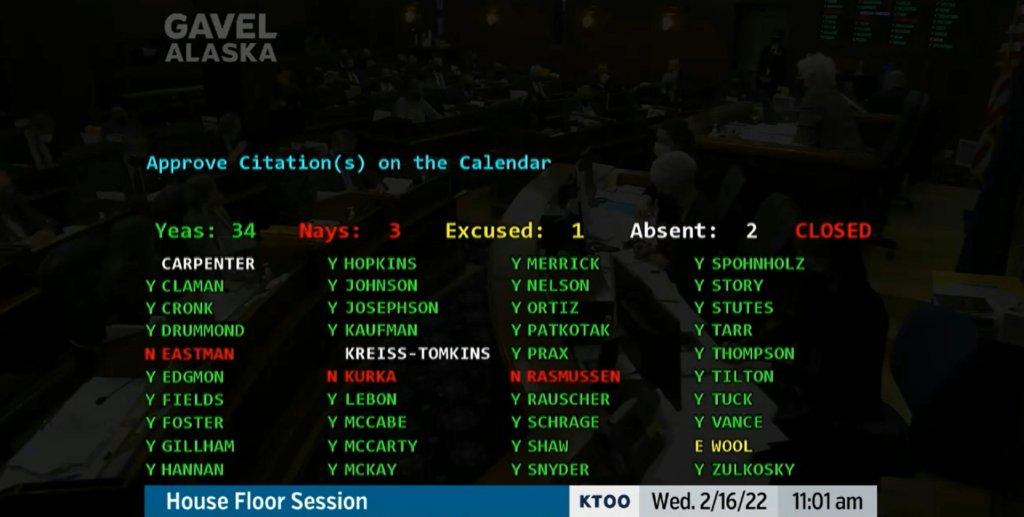