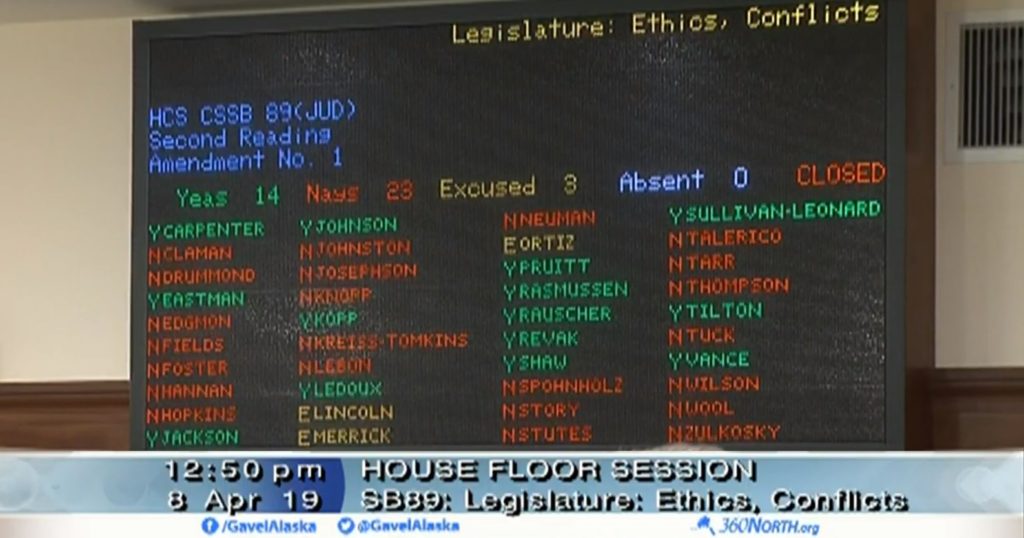 While legislators in Juneau are celebrating today’s passage of yet another Ethics Law for legislators (SB89), the Swamp culture remains alive and well in Juneau today on Day 98 of the legislative session.

Of all the twists and turns the bill took to get to today, the vote above is likely the most revealing as to the longevity and current vitality of the swamp.

You can watch the floor debate here.

The question being voted on was uniquely straight-forward (for Juneau):

Amendment #1: When legislators vote to waive each other’s conflicts of interest before voting, the name of both legislators shall be reported publicly in the journal.

The legislators in red voted to preserve legislators’ anonymity when they are voting to waive a conflict of interest.

So yes, we have a new ethics law, but it remains utterly dysfunctional. And, apparently, some prefer to keep it that way. To cite but two of the most glaring examples:

1) Two legislators may vote to waive each another’s conflicts of interest immediately before voting on a bill, and the public is unable to know who voted to waive the conflicts, which then requires the conflicted legislators to vote on the bill anyway. It is a truly bizarre system, the likes of which you will be hard-pressed to find in any other state.

2) Because of the “Benefit or Harm” language currently in the bill, legislators are legally prohibited from taking certain actions that are in the best interests of Alaska and of their constituents if it is likely to “Harm” the legislator’s own financial interests. Come again? What kind of ethics law requires a legislator to give priority to their family’s financial interests over what is best for the people they were elected to serve?