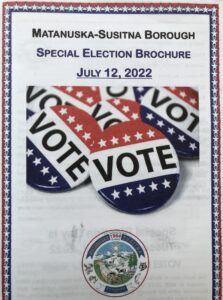 If you’re like most Alaskans, amidst the flurry of 4th of July events, last week’s presidential visit, and the normal craziness of summer activities, you probably haven’t heard much about this week’s special election in the Mat-Su. Given that so few people are following this particular election, your one vote stands a good chance of having a greater impact this week than in any previous borough election.

Let’s take a look at what is at stake in this week’s election.

There are four ballot measures, all of which will impact every Mat-Su resident (see Tuesday’s Sample Ballot).

Here is the Election Pamphlet that was mailed out to voters by the borough.

Voters will have a say on Increasing Senior and Veteran Property Tax Exemptions, Establishing Lifetime Term Limits for the Mayor and Borough Assembly, and approving a new borough redistricting plan. Let’s take each issue one at a time.

1. Increasing Property Tax Exemptions for Seniors and Military Veterans. Proposals like this often pass because, let’s face it, who wants to vote to punish seniors and veterans? But that does not automatically mean that it is good for everyone in the borough and that it should pass. As a conservative and a veteran myself, here is how I think through this.

The borough’s current method of calculating property taxes is less than praiseworthy. By taxing the unrealized gains of your property’s appraised value it punishes you (and every other member of the borough) for making improvements to your home and property. With the ups and downs of the housing market, it also taxes you on gains you may never actually benefit from (note: the IRS doesn’t even tax unrealized gains). The current arrangement also creates an incentive for the borough to appraise the value of your property a bit higher than it actually is, punishing you still further (for an example of how to correct this, see House Bill 378).

All borough residents are currently being punished unfairly. Is it a good idea then to single out one group (or, in this case, two groups) for less punishment? Yes and no. If that is all it does, I would say yes. For example, if the borough had identified prudent ways to reduce the borough budget by the $2.9 million in revenue that will be affected, or had identified an on-going $2.9 million surplus to offset the increased tax exemption, then I would know what I am voting on and could then weigh the value of what is being cut from the budget against the higher exemption.

But if the increased exemption will merely have the effect of decreasing the punishment experienced by one group (those who will benefit from the increased exemption) and increasing the punishment felt by another group (those who won’t benefit from the exemption), then I’m not very excited about it. As a legislator, those I hear from most about property taxes are those who are least able to pay the tax (i.e. those on a fixed income, those who can no longer weather the cold winters but return as soon as it warms, those who spent their last farthing in family court trying to get their kids back, etc.). Some of those would be helped by the exemption. Some may be hurt even more than they already have been.

Likewise, reducing the punishment experienced by our disabled veterans is a good thing. However, the proposed exemption relies on the VA acknowledging a veterans’ disability. I know veterans who are unable to work due to their disabilities but who can’t get VA acknowledgment due to bureaucratic rules, medical records that the military “lost”, and the like. Some veterans spend years trying to get their claims approved. Some veterans die trying.

If a tax “cut” for one group is going to result in a tax increase for another group down the road, is it really a tax “cut”, or is it more of a tax “shift”? If I am shifting the tax burden away from our veterans who have survived the gauntlet of the VA’s bureaucracy, to those veterans who are still trying to make their way through that bureaucracy, am I really helping veterans? Bottom line: It is easy to vote for things that help veterans and seniors, but what a policy is intended to do and what it actually does are rarely the same thing.

(Note: As a military veteran and homeowner, I have to resolve the conflict between my personal interest in a higher exemption, and my general interest for the welfare of other borough residents who would not be receiving the exemption. Such conflicts are not always easy to resolve.)

2. Lifetime Terms Limits for the Mayor. Taken at face value, this proposal seems a bit odd. We currently have term limits for the borough mayor. Like the governor, no mayor can serve longer than two terms back-to-back. Members of the borough assembly currently have the same term limits. What this proposal would do is say that a mayor who served two terms as mayor from 2000-2006 cannot run for mayor in 2022. This would prevent Vern Halter from running for Borough Mayor in the next election for mayor. That seems to be the only thing this particular proposition would accomplish.

While I have never voted for Vern, and I expect he will always find a reason to support one of my opponents at election time, it seems like petty, partisan gamesmanship to say that no voter should ever be allowed to vote for him for mayor just because I choose not to. It is also notable that the current members of the assembly have exempted themselves and the current mayor from the new term limits. Where the term limits would limit assembly members and the mayor to two terms, they would allow themselves and the mayor to serve for three terms. If limiting members to two term limits is good policy, why would you exempt yourselves? Again, this has the appearance of giving a substantial political benefit to those who currently hold office at the expense of their current and future political opponents.

As it happens, some Republicans have come out swinging in support of this proposition for no better reason than the protection it would provide to incumbents (most of whom are currently Republican). Mark those who publicly advocate for this proposition. It is one of the clearer examples of political partisanship on the ballot this year.

From a historical perspective, the Founding Fathers debated adding “term limits” to the U.S. Constitution and chose not to (See “Here’s What The Founders Thought About Term Limits“). They put a time limit on each term of office. And that was it.

Even so, term limits (like gun control) often find support from those looking to disarm their political opponents on Election Day. For some, it is not enough to compete with an opponent on Election Day. Their opponent must be prevented from running. As a general rule, you don’t increase freedom by removing power from the people to act (or vote) in their own defense. In a free election, the only real cure for electing bad politicians is getting good information into the hands of voters. Term limits is, at its very best, a poor substitute for that.

3. Lifetime Term Limits for the Borough Assembly. See comments above. The only thing this proposition seem to do is protect the current incumbent assembly members from competition.

4. Borough Redistricting. There are many ways the assembly could have redrawn the district boundary lines that would have apportioned equal numbers of voters into seven districts. Looking at the map below, it doesn’t look like they tried very hard. 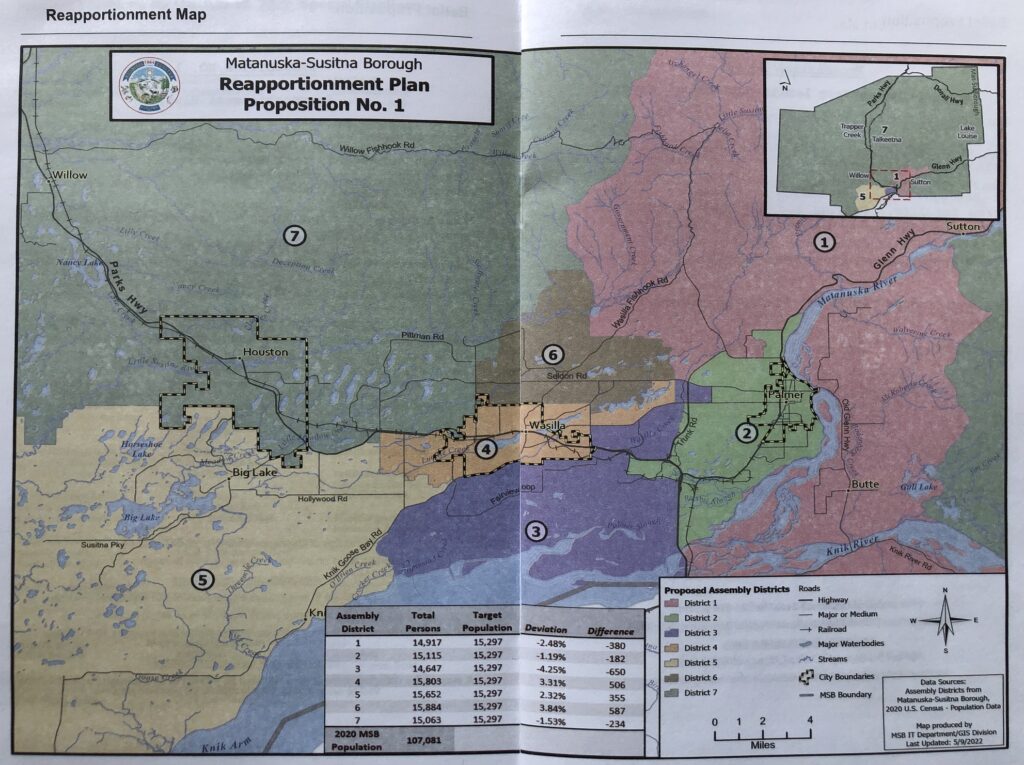 As of the last census, there were 107,081 residents in the Mat-Su Borough. Divided equally among seven districts, there would be 15,297 voters in each district.

The proposed Districts 3, 4 and 6 are out of whack for several reasons. First, District 3 will only have 14,647 residents while District 6 will have an extra 1,237 voters compared to its neighboring district. Also, District 3 (shown in purple) appears to be broken up into three different pieces. Under the current plan, Districts 4, 5 and 6 have extra voters, while all of the other districts are short voters. If there was no way to draw a map with equal districts that would be understandable, but that isn’t the case here.

Without knowing any of the candidates involved, this map certainly gives the impression that it was drafted to favor and protect certain assembly candidates from unwanted competition. In that sense, it was inspired more by a desire to protect the politics of the current majority on the assembly than the desire to divide the population fairly among seven assembly districts.

At a minimum, Districts 4 and 6 should give up some of their extra voters to their neighbor District 3, which is short 1,237 residents compared to District 6, and District 5 should probably give up some of its extra population to adjoining District 7, which is currently short voters. This would also result in District 3 becoming a compact area, rather than one district divided into three pieces. Owing to the next election being right around the corner, those on the assembly who created the plan are probably expecting it to be approved despite these glaring problems.

You have until 8pm Tuesday night to cast your ballot (see the List of Voting Locations).