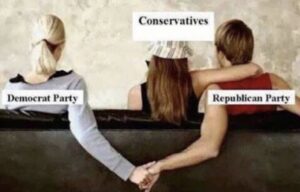 The perennial question in American politics is “How long will conservative voters continue to support and take advice from a political ruling class whose members openly despise them?”

While the jury is still out on that question, the contempt that the ruling class harbors for conservatives is once again on full display through the AFFER legislative redistricting plan authored by Randy Ruedrich and endorsed by various Republicans, including members of our own Mat-Su Borough Assembly.

It isn’t called “the Juneau swamp” for nothing. Conservatives sometimes forget that a majority of the elected officials in Juneau (36/62) are elected Republicans. Unfortunately, many of those Republicans made their peace with the status quo years ago, and are more accurately referred to as Republicans-in-name-only (“RINOs” for short). They did not all start out that way.

If there is one thing that RINO’s in Juneau can agree on it’s that Democrats are not the ultimate enemy. The ultimate enemy is in fact conservatives—not conservative voters, mind you. With the right messaging, voters in conservative parts of the state can generally be convinced to support the status quo, even when that status quo is moving incrementally away from conservative policies. No, it’s conservative legislators that are the problem. The swamp really has no place for legislators who are consistently conservative. It tolerates their existence for the simple reason that having them forcibly removed from the legislature would require a public vote that might put in jeopardy some of its own legislators’ re-election plans.

The 2020 Census
However, once every ten years there is a brief window of opportunity when RINOs in Juneau (and elsewhere) can come together to try to remove conservative legislators from office without ever having to formally cast a vote to do so. That process is known as redistricting, and it is taking place as we speak.

Last year’s census triggered the constitutional requirement that legislative districts in Alaska be adjusted for changes in population. Theoretically, the new district boundaries will be determined using objective criteria such as increases in population and natural geographic landmarks. In practice however, special interests often can’t help themselves when faced with an opportunity to redistrict their political opponents out of the legislature through gerrymandering. RINOs are no exception. This is to be expected.

What should not be expected is for conservatives to support this type of plan, figuratively handing to RINOs the very pen and ink that will then be used to remove conservative legislators from office. Regrettably, anytime conservatives follow the advice of the political class to go along with these kinds of plans, it only reinforces in the mind of the ruling class their long-held contempt for conservatives, and the necessity of removing conservatives from any positions of power or influence in government. Jesus commanded His disciples to be as shrewd as serpents. In this day and age, conservatives cannot afford to be otherwise.

RINOs have put together a map as well. It has come to be lovingly referred to as “The RINO Plan to Punish Conservative Legislators”. But since that level of candor would likely encourage conservative voters to oppose it (and there are a large number of us in Alaska), they decided to officially call it “The Alaskans For Fair and Equitable Redistricting Plan”, or “AFFER Plan” for short).

If you are a RINO and you found yourself testifying in support of this plan over the past few weeks, nothing to worry about.

If you consider yourself conservative and you found yourself supporting this plan—Houston, we have a problem.

The good news is that you have until tonight to correct that mistake and submit additional (or new) testimony to the redistricting board. See details at bottom.

The bad news is that you are going to have to find a new trusted source for your political information, because the person who encouraged you to support the AFFER Plan is either a RINO themselves or has allowed themselves to be used by one in a most humiliating manner.

Let’s unpack why the AFFER Plan could just as easily be called “The RINO Plan to Punish Conservative Legislators and Reward Republican Turncoats”.

However, what makes the AFFER plan truly unique isn’t 25 nominally Republican districts vs. 24, but the great pains its creators took to move conservative legislators out of the districts they currently represent and into districts where they will no longer be able to effectively run for office. In a state where the number of conservative candidates willing and able to travel to Juneau for 6-8 months out of the year is always in short supply, preventing current conservative legislators from running for re-election will have a profound effect on the legislature for the next ten years. It will almost certainly increase the number of RINOs serving in the legislature, while limiting the ability of conservative voters to elect legislators who share their values. This is, functionally, what the AFFER Plan hopes to achieve. Some of the most egregious examples are highlighted below.

Ranking Legislators
For those who may not be able to pick out conservative legislators in a crowd, the American Conservative Union (ACU) is currently the one organization that ranks legislators in all fifty states according to their voting record. Each legislator is assigned a percentage (0-100%) based on how consistently they vote for conservative policies.

In truth, ACU’s rankings are fairly generous to legislators of both parties. For example, Rep. Gary Knopp (R-Kenai, ACU 52%), who abandoned Republicans and voted to give control of the state house to Democrats, still comes out with a 52% conservative rating. Likewise, Senator Tom Begich (D-Anchorage, ACU 29%), arguably the most consistent Leftist in the senate, still earns a 29% conservative rating.

The Plans
As you might expect, the Democrat plan, the Big Labor plan, and Doyon’s plan don’t generally do conservative legislators any favors. The AFFER Plan just takes that antipathy and adds to it.

So what types of examples of jerrymandering are we talking about here? Let’s start on the Kenai Peninsula.

Freshman Rep. Ron Gillham (R-Kenai) currently represents the cities of Kenai and Soldotna in a district where Trump received more than 70% of the vote. What the Doyon Plan does to Ron Gillham and to his district is a great example of the lengths to which outside interests are willing to go to limit a legislator’s opportunity to win re-election. 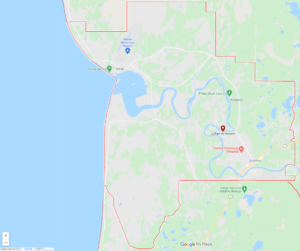 Whereas Ron Gillham currently represents a district that includes two cities; Kenai and Soldotna, the Doyon Plan reaches into his district and pulls Ron Gillham out of his district entirely and puts him into a district with Girdwood, in competition with fellow Republican legislator Ben Carpenter, who has also been removed from the only city in his district. 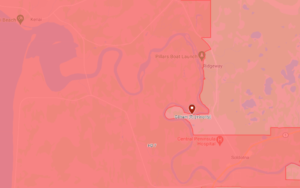 While a more “Republican” plan may naturally want to chip away at some of the more conservative districts in the state in order to shift conservative/Republican voters into districts that might otherwise be won by Democrats, it is difficult to make the argument that that is what is taking place in the example above.

And as clear as the example above is, one finds an even more obvious example of gerrymandering against a conservative legislator in the AFFER “Republican” Plan.

Rep. Ben Carpenter (R-Nikiski, ACU 89%) currently represents District 29, which forms the northern part of the Kenai peninsula, including Seward, Nikiski and Cooper Landing. This is another conservative portion of the state and Trump received more than 69% of the vote in District 29. 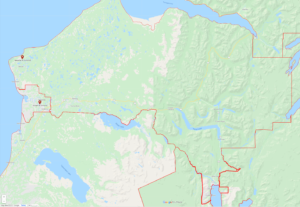 The “Republican” AFFER Plan reaches down into a portion of Nikiski in order to remove Ben Carpenter from the Kenai Peninsula district entirely and place him in a South Anchorage district that extends as far north as Huffman Road in Anchorage, and puts him in competition with Anchorage Republican legislator Rep. Laddie Shaw (R-Anchorage, ACU 54%).

The only portion of Ben Carpenter’s Kenai Peninsula district that moves with him to the new district is the narrow strip of coastline shown here (click here to enlarge): 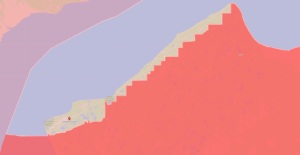 If you are wondering how this map benefits the residents of District 29 or their current legislator, it doesn’t. If you are wondering how this benefits conservatives, it doesn’t. There is only one reason to draw the map in this way; to communicate the antipathy of the swamp for conservative legislators. That’s it. When you consider that such an imaginative way of dividing the Kenai Peninsula will likely be considered unconstitutional gerrymandering by the courts, it further confirms that the purpose of at least this portion of the map has more to do with communicating hostility to conservative legislators than it does with improving Alaska’s legislative boundaries.

Unfortunately, this is far from the only example of conservative legislators being targeted in the AFFER Plan. 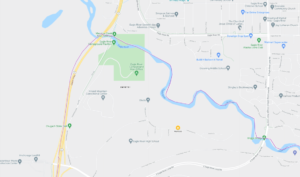 The AFFER Plan redistricts Sen. Mike Shower (R-Wasilla, ACU 100%) and Sen. Shelley Hughes (R-Palmer, ACU 82%) into the same District H, from which only one of them will be able to be re-elected (click to enlarge): 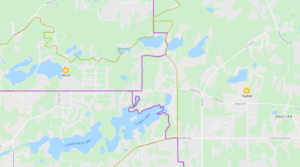 We see the same thing take place in the way that the AFFER Plan redraws the boundaries for District 10, the part of the Mat-Su that I currently represent. 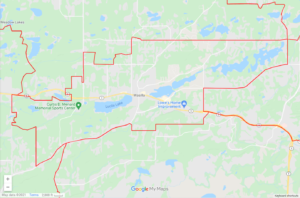 Under the AFFER Plan, this district is redrawn in the shape of a scarecrow’s hat in order to force the two most conservative legislators in the house, Christopher Kurka and myself, to run against one another in the same district (click to enlarge): 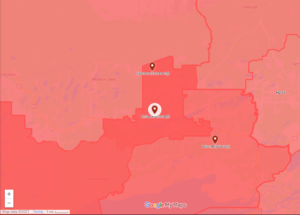 Apparently, this arrangement was so satisfying to Democrats that they chose to include it in the Senate Democrats Plan as well.

To demonstrate how gratuitously punitive the AFFER Plan is to conservative Mat-Su legislators (Sen. Shower, Sen, Hughes, Rep. Kurka, and myself), a friend sent me a map of the Mat-Su that not only redraws the districts according to more balanced population (a population deviation of less than 135 persons in each of the six Mat-Su districts vs. 260 in the AFFER Plan), but also maintain city limits boundaries and, as a bonus, doesn’t pit Mat-Su legislators against one another in a future election (click to enlarge): 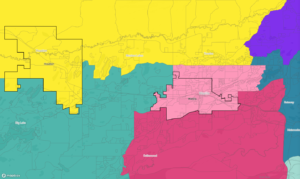 You can find this full map on the Redistricting Board Website at: https://districtr.org/plan/73975

Note: the map above is not meant to be the best map that can be drawn, but simply to illustrate that a much better map of the Mat-Su can in fact be drawn within the relevant parameters, and can be done in such as way as to not intentionally punish current conservative legislators.

If you wish to contact the Alaska Redistricting Board in the few hours remaining before final decisions are made, you can email the board at testimony@akredistrict.org. Please find the relevant details here (click to enlarge):

As the Redistricting Board is a non-partisan organization, they are instructed not to consider partisan arguments (including the location of current legislators and candidates) in their decision-making.

Please limit your testimony to criteria they are able to consider: