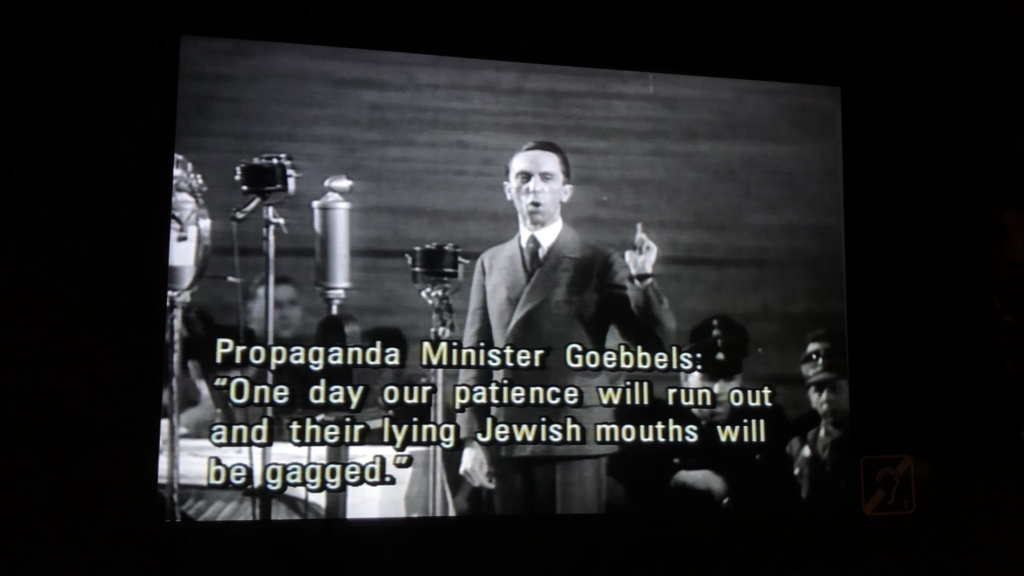 I don’t often sit and watch presidential speeches live, but I did when President Biden announced his new vaccine mandates to the nation. I had a feeling this speech might be different.

Up until that day, the president had always stood against vaccine mandates, and just last year he even went so far as to publicly say that he would personally get a COVID vaccine “only if it was completely transparent…only if we knew all of what went into it“.

These are judgments an individual makes. You don’t conclude something is completely transparent because a politician or a bureaucrat tells you it is. You draw that conclusion yourself after watching the process of information being released, and observing that it is being done with complete transparency (which requires a process devoid of censorship and political coverup).

Perhaps I am the only one, but “completely transparent” is not how I would characterize the current COVID vaccine program. And yet here was the president, on live television, listing off his vaccine mandates. To be sure, the speech left me troubled in spirit.

Gone was the familiar “God Bless America” that ends every presidential address to the nation.

In its place was not a prayer, or a request, but a command: “Get Vaccinated.”

While this is concerning in its own right, even more chilling was the moment when the president paused to threaten 80 million Americans:

“We’ve been patient, but our patience is wearing thin…”
– Joe Biden, September 9th 2021

In that moment, Biden was no longer speaking as the president of a free people. An American president is powerful, but through it all he remains an individual. Since American colonists achieved their independence from King George III, no child in America has ever been a subject of monarchy or made to acquiesce to the royal “we”. Such language is traditionally reserved for monarchies and dictatorships; dictators like Adolph Hitler and his lieutenants (Note: here is a classic example from the United States Holocaust Memorial Museum).
There is a reason Americans associate references to “we’re about to lose our patience” with foreign dictators.
From an American politician, these statements will likely strike many as bizarre, but out of the mouth of a dictator, these statements actually make sense.
Think about it. Dictators aren’t obligated to wait for citizens. If a dictator feels like waiting, he waits. If he doesn’t feel like waiting, he issues the order, and it’s done. The dictator has the right to do what he likes. Everyone else has the right to obey or be punished.
In America, the situation is reversed. It is the citizen who has the rights, and it is the politician who is obliged to protect those rights.
What sense would it make for an American politician to say:
“I’m losing patience that 80 million Americans still haven’t joined my political party…”
or
“I’m losing patience that 80 million Americans still insist on their right to vote…”
or
“I’m losing patience that some Americans are still hesitant to become Catholic…” (like Joe Biden)
or
“I’m losing patience that some of you are continuing to maintain your right to be a conscientious objector from the military draft…”?
A president isn’t being “patient” when he tolerates these rights. In protecting these rights, he’s just doing his job.
The Holocaust Museum
The president’s quip about patience immediately reminded me of the trip I took to the Holocaust Museum as a West Point Cadet. I returned to D.C. this past week, and as my wife and I were walking through the museum, I heard the voice of Joseph Goebbels, getting a crowd ready for Hitler himself, in one of his very first speeches to the German nation:

“One day our patience will run out and their lying Jewish mouths will be gagged.”
– Joesph Goebbels, Hitler’s Minister of Propaganda (at the Berlin Sportpalast)

If you visit the Holocaust Museum you can find it on the opening floor of the Permanent Exhibition: “The Nazi Assault 1933-1939”, under the section on propaganda (You can watch the full video here, and watch or read Goebbels’ full speech here, if you are so inclined).
Not to be outdone by Goebbels, listen to Hitler, also speaking at the Berlin Sportpalast, four days before the allies relented and bequeathed Czechoslovakia to Germany:

For Hitler, it worked. Hitler said he was out of patience, and Great Britain and France relented and abandoned Czechoslovakia.

For historical context, two days after Hitler gave this speech all Jewish nurses were terminated from employment at hospitals throughout Germany. 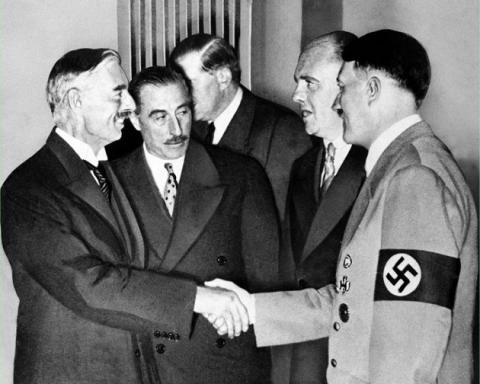 Great Britain was ecstatic!
Above is the photo of British Prime Minister Neville Chamberlain shaking hands with Adolph Hitler upon solving “the Czechoslovakia Problem” and achieving “Peace for our time“, on September 30, 1938, two days after all Jewish nurses were fired.
Watch the newsreel from that day. Listen to the announcer proclaim Chamberlain a national hero.
Needless to say, the photo has not aged well, and neither has the newsreel.
[By the way, if you’re wondering whether Hitler’s speech above was intentionally translated to make Hitler (and therefore Biden) look bad, it wasn’t. The translation was made before either Trump or Biden had become president, and was published by an author trying to paint Hitler in a positive light.]
Before visiting D.C., I briefly highlighted the similarity between the two quotes.
The comparison was so displeasing to the Left that I was labeled a Nazi just for observing the connection. If we didn’t already know, propaganda is alive and well in modern America.
There are some who would relegate the Holocaust to history, and argue that no parallels can ever be drawn to current events. Ironically, that is exactly the kind of thinking the Holocaust Museum was designed to confront.
Each floor of the museum echoes with the message of holocaust survivors and authors like Primo Levi:


In fact, if parallels are not carefully drawn to events taking place in our own day, we can have every confidence that it will happen again. Such is human nature.
It is also true that the events that took place in Europe did not take place in a historical vacuum. Near the end of the permanent exhibit is a final quote from Hitler, less than six months after the fall of Czechoslovakia:

“…send to death mercilessly and without compassion, men, woman, and children of Polish derivation and language…
Who, after all, speaks today of the annihilation of the Armenians?” 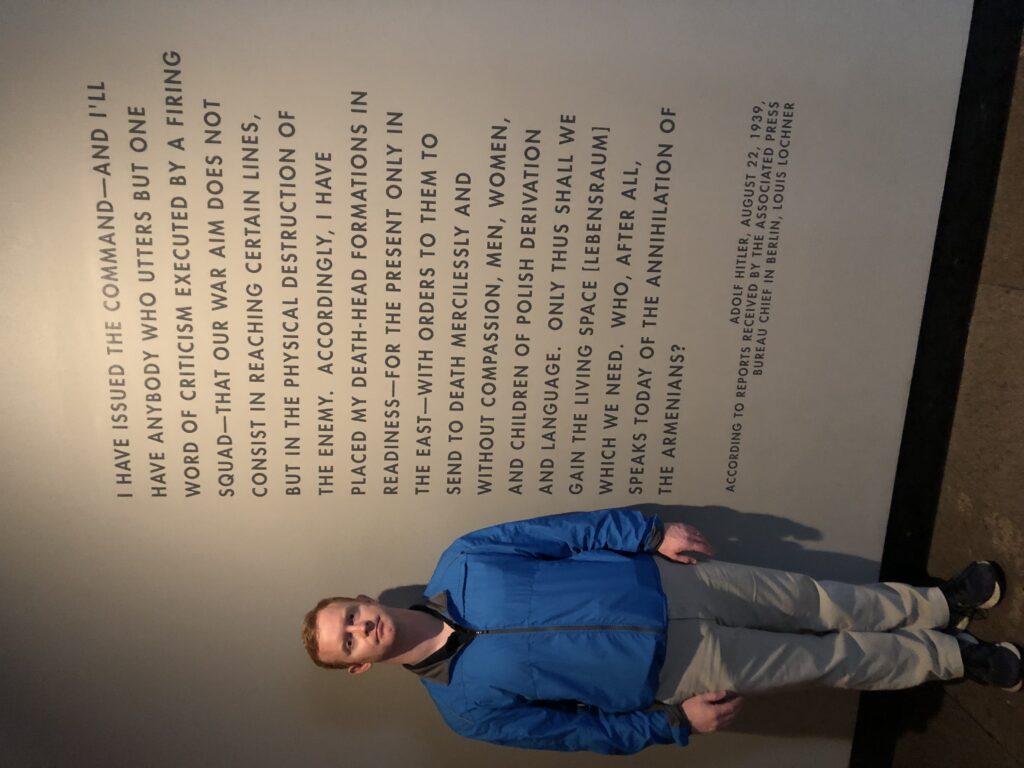 It is our duty today to speak up; for the Armenians, for the Rwandans, for the victims of the Holocaust, and of every genocide.
And if the president doesn’t like being compared with dictators he should stop using soundbites that mimic them in his speeches.