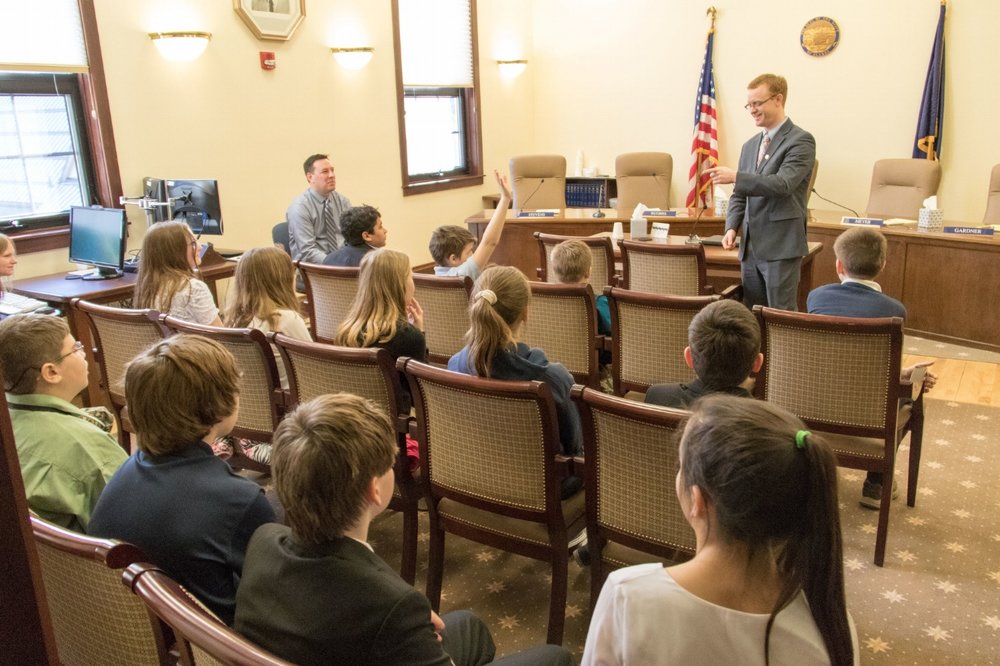 The Alaska House of Representatives witnessed the political equivalent of a nuclear blast tonight. As with Pearl Harbor, there was little warning. And as with any blast, it will take time for the mushroom cloud to clear so that we can see what remains of our legislative process in the morning.

Tonight, I think back to my favorite group of visitors during the legislative session. It’s been 161 days since my family and I left the Mat-Su to drive to the capitol. Over the course of 161 days, you get a wide variety of visitors to the capitol; constituents, former legislators, judges, lobbyists, activists, celebrities, pastors, experts of one kind or another, volunteers, etc. But my favorite group to visit the capitol didn’t fall into any of these categories. It was a visit from Academy Charter School in the Mat-Su.

The questions from the students were thoughtful and on-target. In turn, I hope we gave them an honest account of what it is like to serve in our state legislature. One student asked if it was worth it to run for office and go down to Juneau. Another student asked what the hardest part of being a legislator was. Based on the events of this week, a number of us are likely wondering if we need to go back and rethink how we answered some of those questions.

Like oil in a car engine, confidence is what enables our political process to function, and part of that confidence snapped today. When legislators from all across Alaska gathered in the House Chamber this morning, Republicans were not anticipating that House Democrats would end the meeting no more than five seconds after it began.

When House Democrats gave Republicans a mere 20 minutes heads-up before reconvening the house of representatives at 6:30pm this evening, legislators had to scramble to return to the Capitol, and one legislator who had been jogging, had to change clothes on the House Floor, to avoid missing the first part of the meeting.

When the meeting began, there were no bills on the agenda, and Republicans had not been told anything about what would take place, except that an attempt to combine the state operating budget (which keeps state government from shutting down) and the state capital budget (which funds the construction of state infrastructure) would not be taking place. House Democrat leadership assured us that was not going to happen.

No sooner had the meeting begun, then an 89-page document, written the day before, but never disseminated to Republicans or to the public, was placed on legislators’ desks. We were told that we would be required to vote on it, and that we would not be given time to examine it, or even the normal amount of time to debate it. That document was then to be immediately inserted into an 82-page document, which we would also be voting on. All told, the spending in the two bills totals somewhere near $12 billion (but I honestly don’t know the exact figure). I might hazard a guess that the finished document will be about 170 pages long, but that, too, would be speculation, because the document itself has not yet been made available.

As of this writing, even though it has already been several hours since it was passed by the Alaska House of Representatives, it has still not been made available to the public, or to Republican Legislators, for review. I am told it is an attempt to combine both the capital budget (SB23) and the operating budget (HB57) into a single bill, the one thing that all 18 Republican legislators had been assured that House Democrats would not be doing.

When Republicans legislators protested being forced to vote on a bill that they had never been given an opportunity to even read, House Democrats responded unanimously by refusing to allow any opportunity to review the bill, and by voting unanimously to limit debate on each of the bills to no more than 2 minutes per legislator. You can find my 2-minutes here and here.

In Alaska, we have an Open Meetings Act to ensure that the public is able to observe how government decisions are made that will impact their lives. Current state law, AS 44.62.312, makes clear to every Alaskan that “The people of this state do not yield their sovereignty to the agencies which serve them,” and that “The people, in delegating authority, do not give their public servants the right to decide what is good for the people to know and what is not good for them to know.” These are long-standing Alaskan values that the legislature would do well to heed.

Our function as legislators is to stand in the place of those we represent, in an orderly process that maintains the confidence of the people. Without that confidence, the people retain the authority to disapprove of laws we pass, through referendums, and to disapprove of our continuing in office, either through a recall effort or a future election. But there is a great deal more at stake today than whether a political party or a politician is thrown out of office.

Yesterday’s attack outside of DC highlights the terrible consequences that can result when even one American loses confidence in the ability of our political institutions to resolve our nation’s conflicts peacefully. Pursuing the kinds of reforms that will one day justify increased public confidence in our political institutions, and in the laws created by those institutions, is the duty of every lawmaker. As an institution, the Alaska House of Representatives violated that duty today. Our work tonight does not justify increased public confidence. It will now require even greater efforts on the part of future Alaska legislators to simply regain the measure of public confidence that some current legislators have clearly abused.

To students, I say: If you are willing to work hard to provide a real service to your neighbors and to your community, then consider preparing yourself to one day stand in the gap on their behalf in elected office. Short of that, it’s not worth it. As a legislator, you will sometimes find yourself lumped in with some of the very worst politicians out there. Those close to you will be reminded why politicians have earned such low approval ratings from the public.

At times, it may seem like a David & Goliath struggle simply to stand in the gap on behalf of the good people who helped put you into office. No matter which party you belong to, it will take courage to go against the flow, and to speak out against the injustices you encounter. And it will take a better memory than most to keep from forgetting why you were sent to the capitol in the first place. But if you don’t rise to the challenge, who in your community will have the courage to do so?