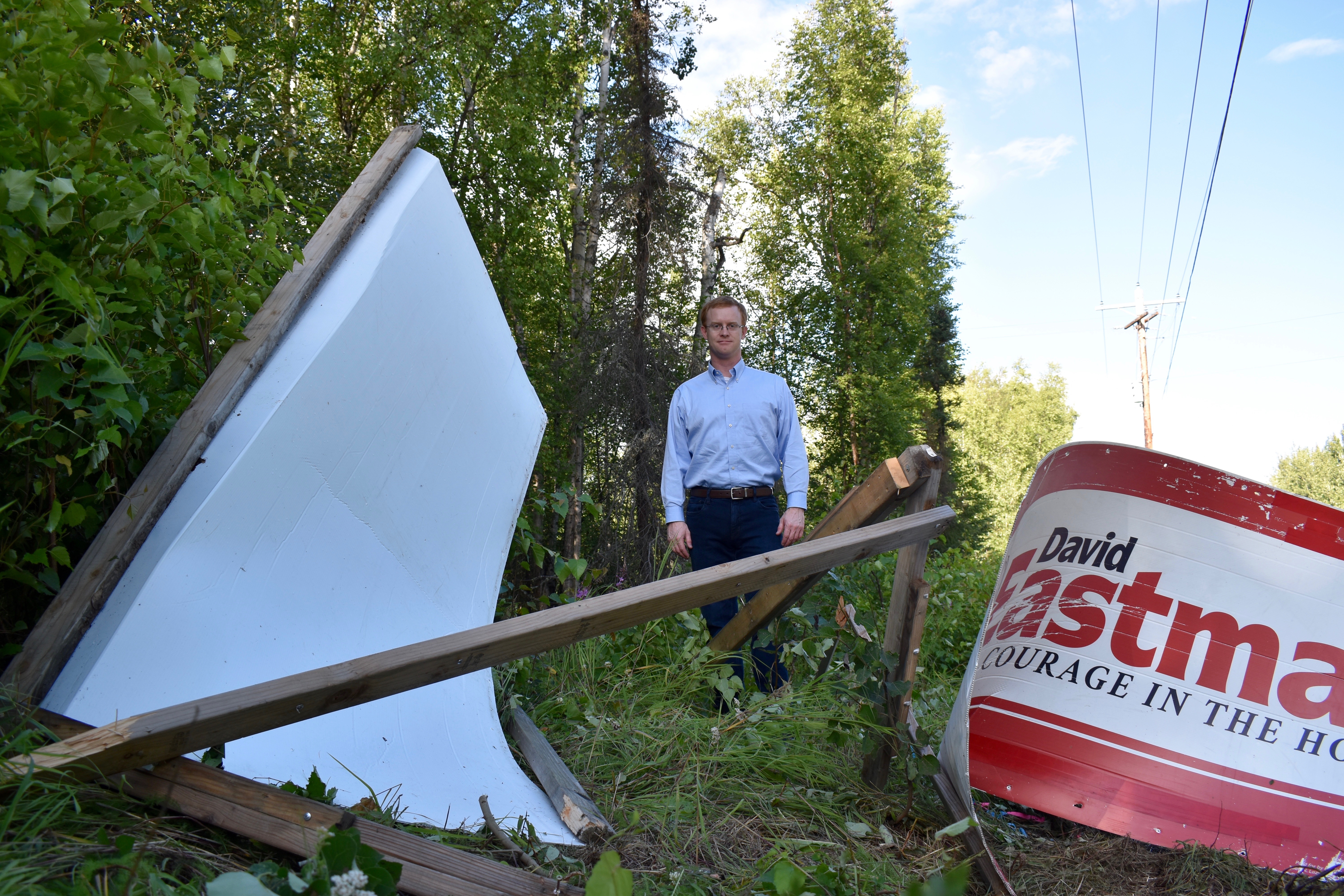 (Surveying the wreckage of a sign that was demolished on Sunday, 7/26/20)

Over the weekend, six of our campaign signs were targeted and demolished. The targeting began at about 7:30pm on Friday night. On Sunday afternoon, our neighbors texted us that the sign on their property (above) was targeted. It was smashed while they were at church.

Judging by the tire tracks on some of the demolished signs, someone drove off road and onto our neighbor’s property in order to run over the sign, and likely repeated the process for the five other signs.

Putting up a new sign costs our team around $200 when you count the cost of printing for two signs, lumber for the wood frame, fasteners, brackets, shipping/transportation, stakes to makes sure it doesn’t get blown over, etc.

And while I would be grateful for donations to help build new signs, that is not the main reason for my writing today.

We hear more and more these days about how easy it is to replace private property: “Don’t worry that a shop was burned, or that a flag, or a statue was torn down—it’s just property.” Too often, homeowners and business owners are told by law enforcement, “We can’t really focus on small crimes like shoplifting or the fact that someone keeps breaking into your mailbox—we hardly have enough time to focus on the felonies.” The sentiment is: “It’s just property. It can be replaced.”

Compared to a person, they’re right of course. Damaged or stolen property can often be replaced. A life lost never can be.

But this comparison masks the truth. When you get right down to it, property can’t be fully replaced either.

Time is something that can never be replaced.

And time is invested in property.

If your home burns down, you can build another. Perhaps insurance can help you if you have it. But you can never get back the six months (or six years) you invested in building your first home.

When we think about it, we find that property, which requires investing a part of your life to create, isn’t nearly as replaceable as we keep hearing.

Building these signs was a labor of love from a fellow veteran and dear friend of mine who gave of his time for free. He can’t help me build new signs this time because he is no longer with us. You see, his funeral was last month. 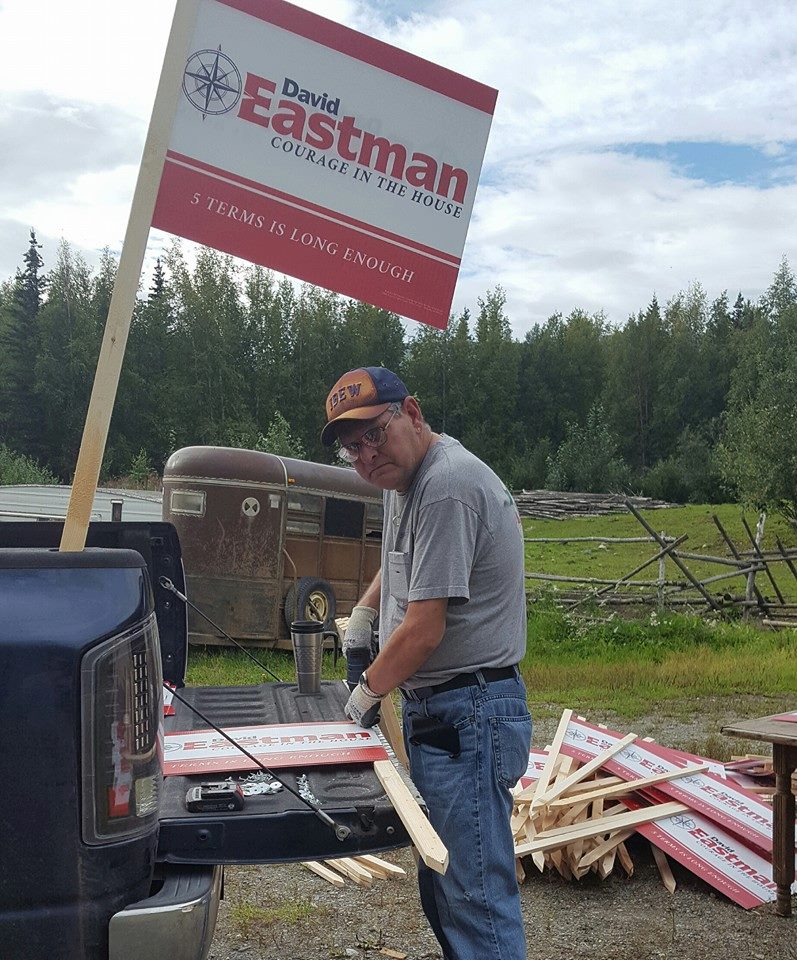 He died at the age of 57, after a long illness made worse by his time in the Marine Corps.

He chose to give some of the time that he had to build signs. He can never get that time back.

Donations can’t replace that. New signs can’t replace that, or make me feel better when I think of the friend that I lost last month. I remember our last family visit before he passed. The kids ran inside to show “Mr. Tony” the pictures they had colored for him. He wasn’t able to greet them that time. The illness had nearly run its course, and he was asleep when we arrived.

We wouldn’t for a moment tolerate slavery; forcing a man to work for ten years (or even a day) and receive nothing for his labor. But after a business owner has worked those same ten years (or ten days), somehow it doesn’t seem as bad when the government comes in and shuts down the business he labored those years to build, or takes the wealth he built up by that labor, and transfers it to someone else through wealth redistribution.

The new “wokeness” teaches us to dispense with looking at individuals, and see society instead as two groups; the haves and the have-nots.

Individual private property rights are anathema to this new wokeness.

So are individual rights that a person possesses from the moment life begins.

In place of individual rights, we have group identity, which seductively argues that one white person is basically interchangeable with another white person, and one black person is basically interchangeable with another black person. When we meet individuals we know this can’t be true, but it is still preached from positions of power and authority as though it were true.

Our laws and constitutions say that every person has a right to life; that no person is replaceable by another person.

And yet, our courts say that some people are replaceable.

But we know this is false. Every person is unique. Unique fingerprints. Unique personality. Unique DNA. Unique life story.

Even so, the abortion industry tells us that if that life story isn’t long enough…it is replaceable; as though one child’s death is simply an opportunity for that child to be born somewhere else.

It doesn’t work that way.

The folly of group rights begins by saying that one group, those that are born, have rights, while another group, those waiting to be born, are replaceable…like property.

Each life story is unique. Even those cut short at the very beginning.

That story is not erased, and replaced by another…it is simply cut short.

At no point will there be another child with that child’s DNA.

At no point will there be another child with that child’s fingerprints.

At no point will there be another child with that child’s soul.

At no point will there be another child with that child’s life story.

We are at a pivotal time in the life of our nation. The fundamentals, that have permitted our nation to be a beacon of liberty and individual rights the world over, are under attack. We are under attack. No American is exempted from this attack. Even those most eager to see America as we know it cease to exist, are not exempted. If they are successful, their individual rights will be violated along with the rights of everyone else.

Those of us who can see it, have a role to play in this pivotal time. Our constitutions bear out these individual rights, both of life and property. Will we stand by our constitutions? If not, we will witness their destruction.

The choice is ours, to spend the time that we have, how we will. Once spent, we can never get it back. Spend it wisely.