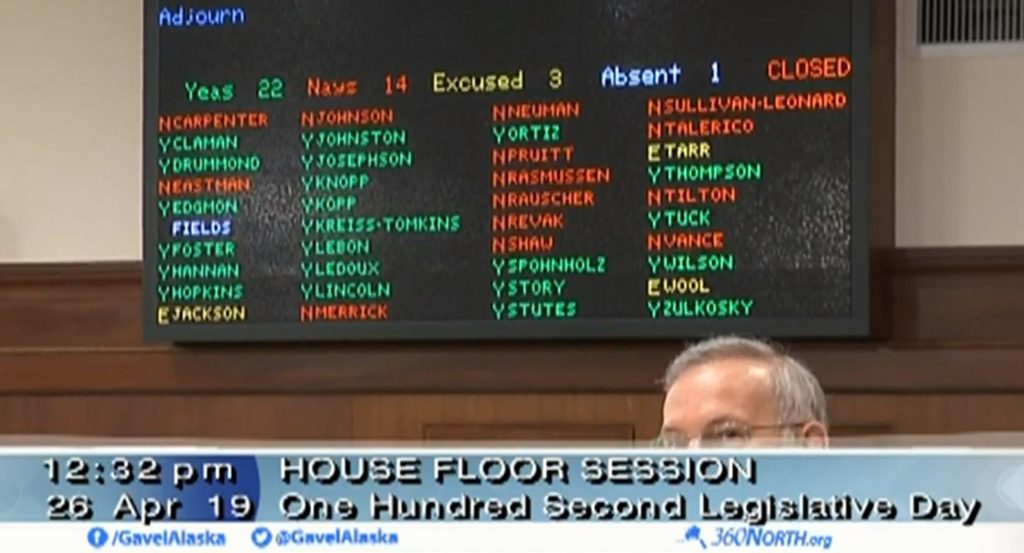 A valiant effort to lift the Alaska State House out of the gutter was stonewalled today by House Democrats and Majority Caucus Republicans.

“It is the sense of the House; That on April 17, 2019, during Joint Legislative Session confirmation proceedings, unsubstantiated accusations made by certain members of the House defamed the personal character of several volunteer nominees on the floor of the House of Representatives. The members’ actions deprived Alaskans of due process and any opportunity to offer a defense of their character and were an abuse of the privilege of legislative immunity. Therefore, these members’ actions are hereby condemned as having undermined the dignity of the Legislature and resulted in a breach of trust with the people of the State of Alaska that must be restored.”

When I and other Republican legislators began to rise in support of this proposal, the majority first attempted to deny legislators the opportunity to debate the issue, and when the majority was unable to accomplish that, they instead forced an adjournment of the floor session mid-stream rather than let the issue be discussed openly on the House floor.

Too many good people have been victims of the bullying and character assassination that has become acceptable to the members of the House Democrat Caucus. This must end today.

I know all too well what it is like to be slandered on the floor of the House of Representatives and to be denied the means and opportunity to defend yourself from the character assassination of Democrat legislators. As a freshman legislator, I was on the receiving end of similar accusations and slander from the very same two legislators who attacked and attempted to assassinate the character of a number of the governor’s appointees last week.

After responding to one false accusation, I was forced to listen to slander against me for ninety minutes on the floor of the House of Representatives, against which I was not permitted to respond or defend myself. And then I was told to vote on it.

During ninety minutes of character assassination, I was accused of voting the wrong way on several bills (No, that is not an exaggeration).

I was accused of being a racist.

I was accused of being a sexist.

I was told that my record of voting against Democrat legislation proved it.

I was specifically condemned for making a formal request for a hearing into the misuse of tax dollars for state medicaid travel, and that my making such a request was intolerable (No, that is not an exaggeration either).

Needless to say, we never received our hearing.

Character assassination and slander are from the gutter, and it is high time the Alaska House of Representatives left the gutter and took steps to actively restore the trust of the people of Alaska that it has lost through tolerating such vile behavior.

** The Democrat legislators sitting immediately in front of me and next to me both resigned from the legislature for physically abusing women, but on that day their indignation and condemnation of me was in rare form. They boasted proudly to the cameras that they were protecting the dignity of women as they slandered and condemned a Republican lawmaker.