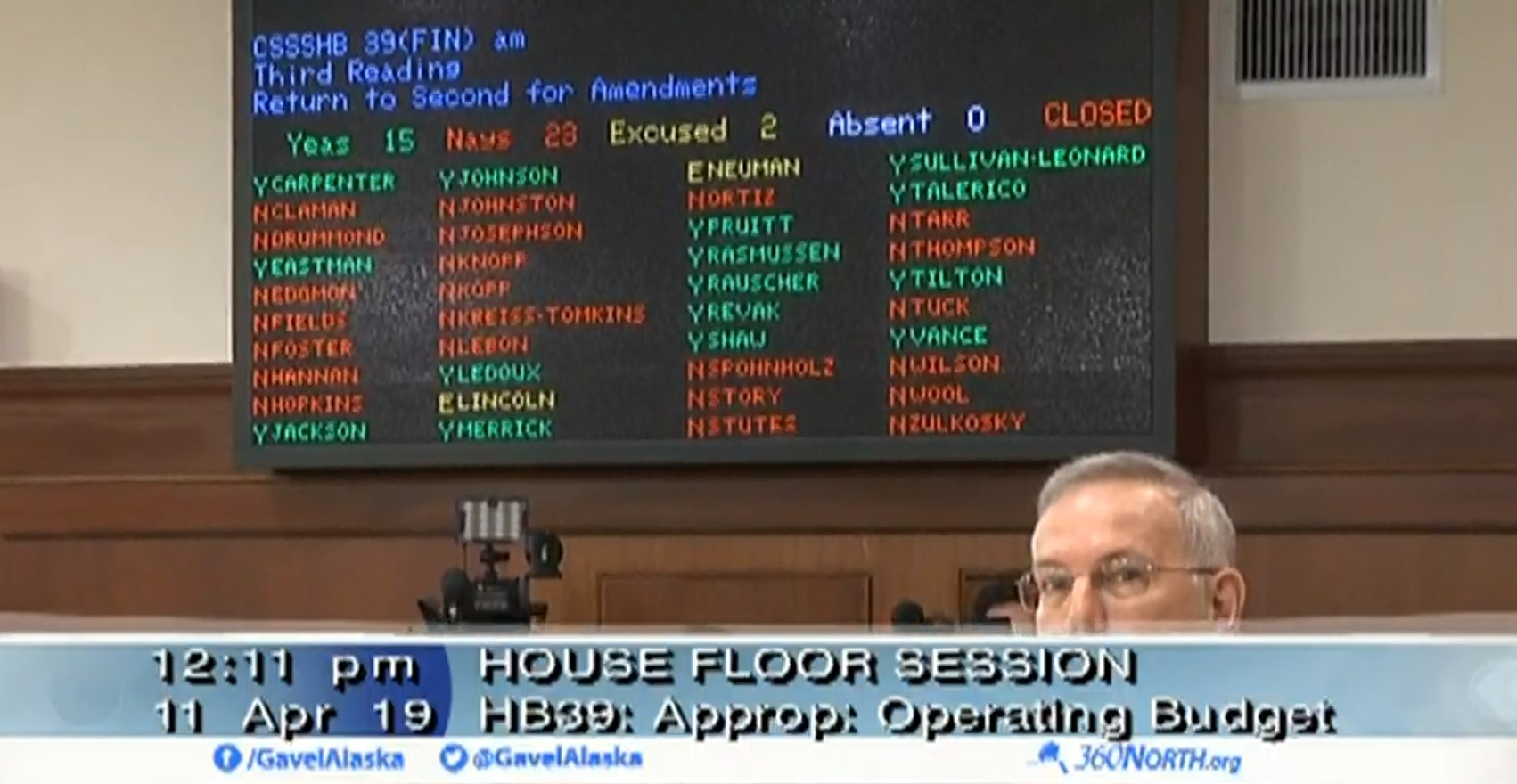 Today, members of the House Democrat-led Majority Caucus, responding to efforts by Republican legislators to pass a full 2019 Permanent Fund Dividend, effectively declared war on the PFD with the introduction of House Bill 1005.

The bill also requires permanently changing a separate section of state law so that 75% of all future permanent fund income will be spent to prop up unsustainable state spending, leaving at most only 25% for future dividends.

The bill also uses some monies that have no connection to the permanent fund or to earnings from the permanent fund to pay for the new “dividend”. In exchange for giving up 50% of all future dividends, the bill offers Alaskans a one-time payment of $3,000.

For the last 127 Days of the Legislative Session, the 24 bipartisan members of the Democrat-led Caucus (shown in red above) have gone to great lengths to kill every attempt by Republican minority legislators to distribute a full Permanent Fund Dividend this year.

After repeated public assurances that the PFD would be voted upon during this year’s normal budget process, these 23 legislators (shown in red above) went back on their word and voted to prohibit debating and passing a full Permanent Fund Dividend this year. For 126 days they have repeatedly, and in violation of legislative requirements, blocked every effort to fund the PFD, or even debate the topic on the House Floor.

This is why the regular legislative session ended without a single dollar being approved for this year’s Permanent Fund Dividend.

House Bill 1005 was filed in response to my filing of House Bill 1002, which would guarantee payment of a full 2019 Permanent Fund Dividend.

To make it clear which of these two proposals is supported by legislators in the Democrat-led majority, they put forward HB1005 under the name and sponsorship of the seven Democrat-led Majority members on the House Finance Committee (the first seven members of the committee).

To make explicitly clear to the public which bill proposal they are supporting, they chose to send the bill to themselves in the House Finance Committee.

The bill to pay a full dividend, HB1002, was instead assigned to wait for hearings in three committees, the first two of which have effectively been disbanded, and are not scheduled to even hold a meeting until the year 2020.

The bill to payback the portions of prior dividends that were withheld, HB1003, received the same treatment as the bill for a full dividend. They also sent HB1004, to pay back the interest on the withheld dividends, to the same two committees that will not be meeting again until sometime next year.

Tomorrow, the members of the Democrat-led House Majority on the House Finance Committee will go through the motions of taking “public testimony” to see how the public reacts to their actions today. In an effort to hear from all Alaskans, they scheduled public testimony for 9am Thursday morning.

Below is a list of the members of the Democrat-led House Majority.

Are these the legislators you voted for in November? If so, why did you do that?