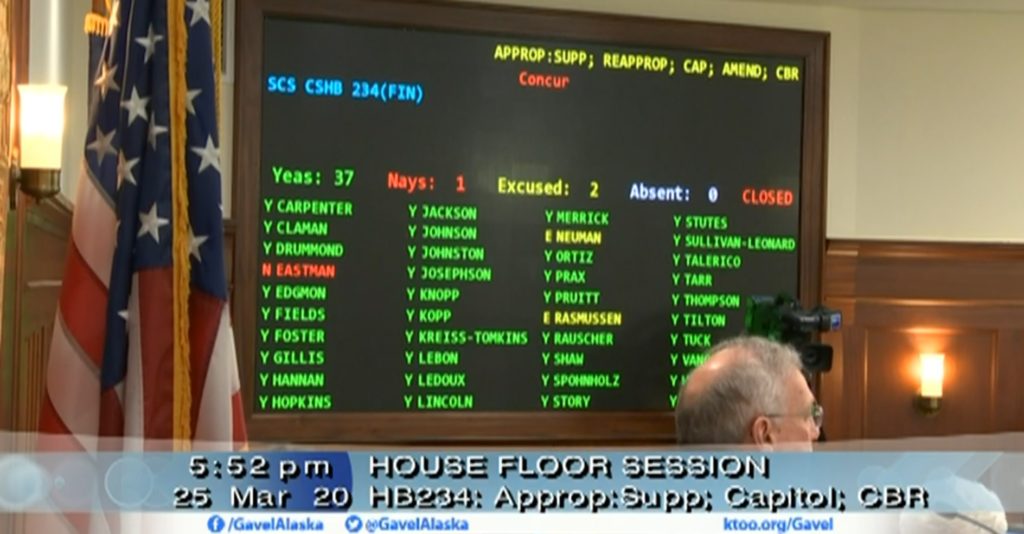 Oil is hovering around $25/barrel (60% less than what is required to fund this year’s budget).

The value of the Permanent Fund has decreased this year by roughly $8 billion due to the stock market.

The Alaska Seafood industry has been decimated by empty Chinese ports due to the coronavirus.

The tourism industry has been all but annihilated, with cruise ships cancelling their trips to Alaska due to the coronavirus.

Have I left anything out about state revenue this year?

Oh yes, Alaska businesses are shuttered today by government mandate, employees laid off as the state begins its war with the coronavirus. Many of those businesses will be reporting losses this year. Losses do not generate corporate income taxes for the state.

Virtually every source of income the state has is cratering, and it is unlikely that federal aid will make up the difference.

In short, we’re not making money this year.

So of course it makes perfect sense for us to pass the largest supplemental budget in state history. Is that how it works at your house? When income goes down, you spend more to make up the difference?

The Minority Caucus celebrated passage of the bill tonight with a press release titled “House Republicans Unanimously Support Supplemental Budget…“. And yet ten Republicans voted against the exact same bill the last time it came up for a vote, and one Republican voted against it again tonight. Are they saying that voting for this monstrosity is so fundamental to what it means to be a Republican that one cannot vote against it and still be considered Republican? What a curious bill to fracture a caucus over.

While tonight’s bill does authorize $23.5 million to combat the coronavirus, it is wholly dishonest for legislators to call this a coronavirus relief bill. The people are not the ones experiencing relief tonight. Any relief being felt tonight is being felt by the lobbyists.

Conservative Republicans in the senate refused to vote for this bill (Sen. Shower, Sen. Hughes, Sen. Reinbold and Sen. Costello were all excused from voting). All Democrat senators voted for it.

All Democrat legislators in the house voted for it as well. The only two legislators to vote against it from the outset were Rep. Mark Neuman and I. Only by removing me from the caucus, and Rep. Neuman not being present for tonight’s vote, could the minority claim “unanimous support” for it.

And why did conservative legislators not rush to vote for the bill? Ask them.

In addition to it being the largest supplemental in state history in a time of declining revenues, there are four sections of the bill that some in my district find particularly offensive.

Each concern is substantial enough to merit its own white paper, but for now I simply offer some highlights at the links above.

Judging by their track record in the current legislature, “Surrender Caucus” would be the more appropriate title. About the only thing they haven’t surrendered on this year would be this year’s CBR reverse sweep. But, based on past experience under fire, I’m certain a justification will be unearthed in the next day or two for them to surrender that too. I would love to be surprised, but—under the current minority leadership—surrender seems a foregone conclusion.