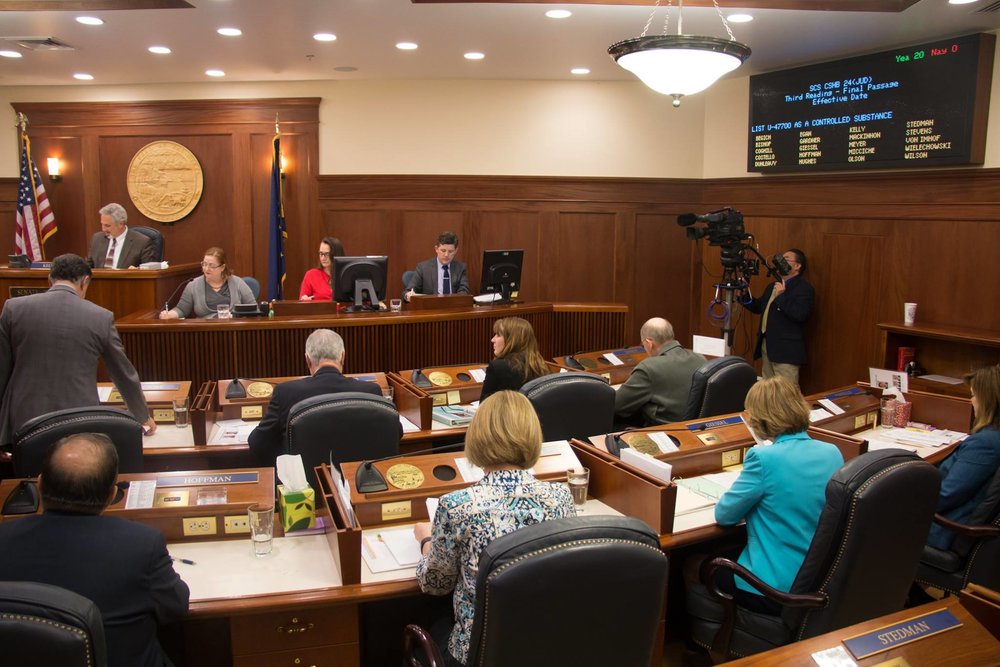 Five people were shot after a political attack against members of my government took place outside DC last week. A man asked if the people playing baseball were Republicans or Democrats. Then he started shooting.

When a professor at my state university recently painted Captain America holding up the severed head of my president, and then put that painting on display at the University of Alaska, we were reassured that the act itself was not an act of violence and that no one was hurt by it. He was simply channeling his grief at the outcome of the election.

When Americans were attacked and beat up for attending rallies in support of the man who is now our president, we could at least be reminded that it wasn’t armed conflict and that no one had been killed. Nothing to worry about, right?

Then a professor in the DC area declared to the world last month that Republicans in Congress, “should be lined up and shot. That’s not hyperbole…” Maybe he didn’t mean it, some said.

What do we tell ourselves now, after a man terrorized Americans at a baseball practice because he found their politics unacceptable? What do we tell ourselves after some responded to the attack, “Its’s a shame more Republicans weren’t shot”, a Democrat Party official in Nebraska declared publicly, “I’m glad he got shot. I wish he was f****ing dead.”, and the founder of a major liberal news site declared: “Republicans are getting what they want.”

Running for office is expected to have its share of challenges of course: public criticism, late nights, early mornings, time away from family, etc. But, excepting combat vets, the thought of getting shot at isn’t something most elected officials have ever had to wrestle with. Having people literally wanting you dead, and saying so publicly, isn’t something most elected officials have encountered throughout our nation’s history. In that, we have been blessed.

But something profound is happening in America today. A segment of our society has decided that it is not enough to disagree politically. Disagreements have always been with us, even profound ones. That is nothing new. What is new today is that some have abandoned resolving those disagreements without resorting to condemnation. Some in America have lost the capacity to let their personal ideas be challenged without seeing such challenges as a threat to their person, as a threat to their safety. While they are glad to publicly celebrate the defeat of their political opponents on Election Day, they need a “safe space” if one of their candidates loses. Their political opponents and those who would support them are so evil, that unprovoked violence against them is justified.

A college president in our neighboring state of Washington this week asked state police for help in restoring order on campus after a white professor insisted on teaching his class on a day when all white people were asked to leave campus. We have reached a very low point indeed, when the only way to avoid violence is to physically remove an entire race of people from an American college campus.

In political terms, we are witnessing what happens when Americans begin to lose trust in the ability of our political process to negotiate acceptable terms of peace between warring factions. In some countries, violence and threats of violence are how political differences are resolved. America was conceived in the idea that constitutional government, and an American’s right to free speech which it protects, provides an escape from such terrors. You see, freedom of speech doesn’t just protect the person speaking. In the end, it protects all of us, because it preserves the space necessary to communicate and resolve passionate, even offensive, disagreement.

Curtailing free speech, no matter how altruistic the motivation, deprives us of a critical tool in preventing violent political confrontation. Our nation’s founders were not ignorant of such conflict. They witnessed it in the years leading up to the American Revolution, and then over seven bloody years of armed conflict. They left us with many tools; a system of checks and balances, to slow and even pacify the rush to resolve political issues through violence and threatened violence.

Over the years, we have watched as many of those checks and balances have been frustrated, and as succeeding generations have received less and less training in a number of the tools that were at one time simply an assumed part of the American Experiment. As bizarre as it sounds, our laws no longer carry the force of law today. Our elected officials no longer feel bound by them as they once did. The growing fear that a judge or justice will step in to overturn a written law or the result of an election, for whatever reason, has hastened the erosion of confidence that everyday Americans still have in our laws, and in the political processes that determine what those laws will be.

Events like the attack last week, and the responses to it, confirm that our situation is most dire. While a civil war is not necessarily around the corner, we should recognize that we are already many steps down the path towards such a possibility. Now is not the time to simply comfort the survivors of these types of attacks. Yes, comfort survivors. Yes, recognize the heroism and bravery of those who intervene on their behalf and on behalf of others who would have become victims otherwise. But also ask yourself what actions we can take today to alter course and to recover the confidence in our political institutions that has been lost.

Loss of confidence is not simply a marketing problem. It will require much more than an expensive PR campaign to restore it. It will require fundamental reforms and the hard work to bring those reforms about. It will require sacrifice on the part of each of us. As President Reagan reminded the generation of his day, “Freedom is never more than one generation away from extinction. We didn’t pass it to our children in the bloodstream. It must be fought for, protected, and handed on for them to do the same, or one day we will spend our sunset years telling our children and our children’s children what it was once like in the United State where men were free.”

Rep. David Eastman is a conservative legislator in Alaska, representing the rural Mat-Su Valley (House District 10); He ran on a platform of fighting for genuine conservative reform, fiscally and socially, and remains committed to delivering on that promise.