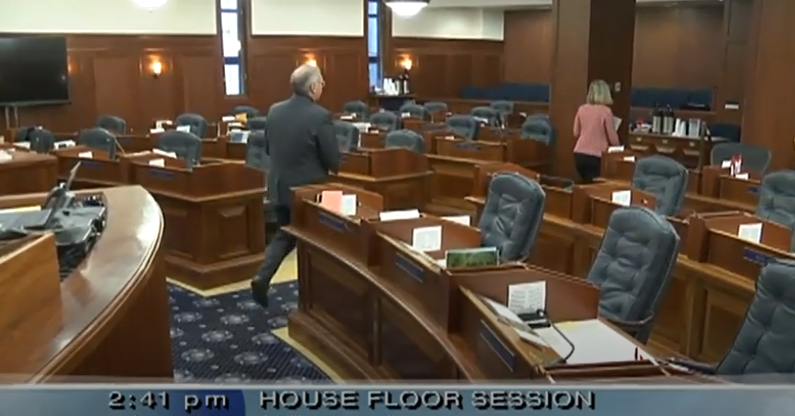 (Two Legislators Race for the Exit after Disenfranchising 700,000 Alaskans with secret vote)

It is a fundamental principle of every state legislature in the U.S. that every legislator’s vote is counted equally—in every state except Alaska that is.

Imagine showing up to the legislative chambers at the appointed time to vote, at 10:30am this morning, then learning that your vote won’t be counted today but the votes of other legislators will be.

Imagine learning that since your vote won’t be counted you are also going to lose your right to speak, while other legislators will be permitted to, if they want to.

Imagine learning that other legislators will be permitted to make motions and participate in the decisions of the legislature today, but you will not be.

Then imagine realizing, as you look around, that you aren’t being treated this way because you have been outvoted. In fact, most of the legislators present are being treated the very same way you are!

That scenario would be unimaginable in any other state in the country, but the people of Alaska permitted it to take place in Juneau this afternoon.

If you haven’t heard, Juneau is run by bullies today. And bullies in the legislature really aren’t any different than bullies on the kindergarten playground. They trample on others to get their way, and they really don’t seem to care what laws, policies, or standards of conduct they have to step on in order to do so.

For bullies it’s much more about putting others down, intimidating and trampling on them, than it is about any particular issues that arise on any given day.

Today, there were only two votes to be taken in the State House:

In most other legislative bodies, these two items would likely never even come up for a vote. Legislators would just meet daily as required, and legislators wouldn’t waste time and energy trying to deprive their fellow legislators from being able to request permission to speak.

Take the Alaska Senate for example. They met today. They allowed every legislator an opportunity to speak. They will meet again tomorrow. The whole event, including the prayer and the pledge of allegiance, lasted less than 10 minutes.

But bullies can’t abide an orderly and transparently fair process—especially when they are outnumbered.

Because more Republican legislators showed up to the House Floor Session today, for the first time this year, House Republicans outnumbered their Democrat colleagues more than 2 to 1 today (See attendance roster).

If every legislator’s vote was counted equally, the bullies in the legislature would have lost today, and their on-going effort over the past month to prevent Republican legislators from speaking would have failed.

“Special Orders” is the one time during every legislative floor session that is officially reserved for legislators to be able to speak freely to their fellow legislators and the public, on any topic.

Fearing what Republican legislators might say if allowed to speak, they have forced the State House to skip this portion of the daily agenda every day for the last month.

This is the same group of legislators that promised the public, and Republican legislators, that the PFD would be voted on during the normal budget process, only to then refuse every single attempt to vote on the PFD during the 142 days the legislature has been in session this year.

This is the same group of legislators that told Republican legislators, and the public, that they would not be holding a regular House Floor Session, only to go back on their word twenty minutes beforehand, as they did on May 22nd, and hold a regular floor session anyway, with more than a dozen legislators absent.

Building on that record, this is the same group that on May 24th forgot they were on live television when they decided that they were simply going to ignore the votes against them and pretend that they had enough votes to leave on a 4-Day Weekend.

After the public backlash and scandal that followed, they decided that it would be easier next time to simply make sure the cameras were turned off first, and on May 28th they proceeded to take a particularly controversial vote without cameras and without informing the public (or other elected legislators) that they would be holding the vote. Legislators who were on hand at the capitol building to vote were told afterwards that they had simply conducted the vote without them.

And so today, outnumbered more than 2 to 1, did this group acknowledge the will of the majority? Hardly.

Rather than honor the will of the majority, these legislators decided it would be better to simply pretend that they had enough votes to end the morning floor session early. They then announced on camera and to their fellow legislators that the House would reconvene when the Chair “Called” them back together (in legislative parlance this is referred to as “The Call of the Chair”).

Of course, after sending Republican legislators away, two legislators then decided to hold a secret legislative floor session without informing the public or their fellow legislators. Because the meeting took place on the House Floor during the day, it was caught on video this time (see video below).

This is what passes for Democracy in Alaska’s Legislature today:

When what you are about to do is opposed by a majority of elected legislators, rather than try to persuade them of the wisdom of your plan, just hold a secret meeting with one other legislator, vote, and then declare that the Alaska State House supported your proposal “unanimously”.

(Video of second session today, with only 2 legislators present)