At 11:00am on Monday morning, 35 house legislators arrived on the House Floor to begin the week’s work in the Alaska House of Representatives. They opened the day with a prayer and the pledge of allegiance, but as soon as legislators were through reciting the pledge, the proceedings were unceremoniously halted by Democrats, who then refused to allow legislators to hold a floor vote for an entire week.

As we rapidly approach Day 90 of the legislative session, it has now been two weeks since the State House even voted on a bill.

And why did Democrats move to impose a new mask mandate on Republican legislators right before the meeting was supposed to start? Wasn’t such a move bound to cause controversy?

Of course it was.

But let’s take these two questions one at a time.

First, why did Democrats bring Monday’s floor session to a screeching halt? 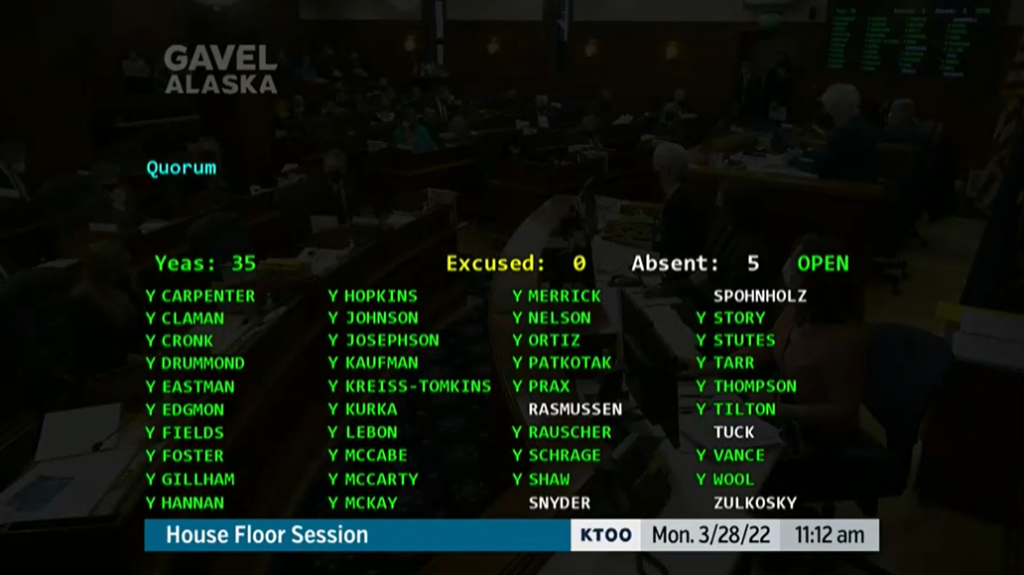 Their absence meant that of the 35 legislators present, 18 belonged to the Republican Caucus, and 17 belonged to the Democrat-led caucus, giving Republicans a one vote advantage. This is why Democrats hit the breaks in the state house last week. Their entire two-year project is predicated on the notion that (because of the Democrats’ Binding Caucus) they already have all the votes they need, and the votes of Republican legislators don’t matter.

On the House Ways & Means Committee, where I sit as a member, there are five Democrats and only two Republicans, even though Republicans hold a majority in the house. This is to ensure that Republican votes (particularly votes from the 18 members of the Republican Caucus) do not matter throughout the entire committee process.

But no matter how heavily they stack legislative committees against Republicans, the House Floor still requires a majority of all legislators present in order for a motion to pass. When 18 Republicans are present and only 17 from the Democrat-led caucus, Republicans matter. That’s why Monday’s voting session could not be allowed to happen.

Even so, there still needed to be some kind of meeting.

By deciding not to permit the state house to meet on Friday, Saturday or Sunday the week before, Democrats ran up against a constitutional requirement that legislators meet no later than Monday. So they met for the Pledge and the prayer. That’s it.

After the Pledge, Republican legislators were encouraged to leave and not to return until the speaker made an announcement calling the house back into session. There would be no announcement. Two hours later, Democrat legislators came back to the House Floor, unannounced, so that they could vote to adjourn when Republican legislators were out of the room and would be unable to stop them. I only know this because I happened to still be working at my desk on the House Floor when it happened.

(Soon to be published: “Republican Legislators Told To Leave. Listen To What Happened After the Cameras Switched Off.“)

The New Mask Mandate
On Monday, it was clear that Democrats would not be the majority of those present. It was also rumored that not only did Democrats not have a majority in Juneau, but they also did not have a lock on the 21 votes they would need from their own members in order to pass their budget in the House.

Imposing a mask mandate on Monday morning was a convenient distraction from this, but it also served another purpose. Monday was scheduled to be the start of Budget Week; the week when Republicans are expected to do more talking on the House Floor than any other week of the year.

Because the budget touches on nearly every policy issue in the state, the only time that many policy issues will be addressed on the House Floor each year is during debate on the budget.

And because Democrats and their supporters control the budget process, their version of the budget is what inevitably makes it to the House Floor for amendment and a final vote. Of the 75 or so amendments which are likely to be offered on the House Floor, few—if any—will be from Democrats. Republicans will offer nearly all the amendments and will be expected to do nearly all the talking.

Imposing a new mask mandate minutes before the beginning of Budget Week will yield a very predictable result. Legislators who desire to participate in that debate (mostly Republicans) will be discouraged from doing so, and those who do participate will be harder to understand while they are trying to talk through a facemask.

There is no excuse for such a mandate. None.

To call it a distraction is to be overly generous. To call it an attempt to muzzle the members of the opposing political party is more accurate.

For my position on the new mandate visit: My Facebook Page or my Telegram Channel.