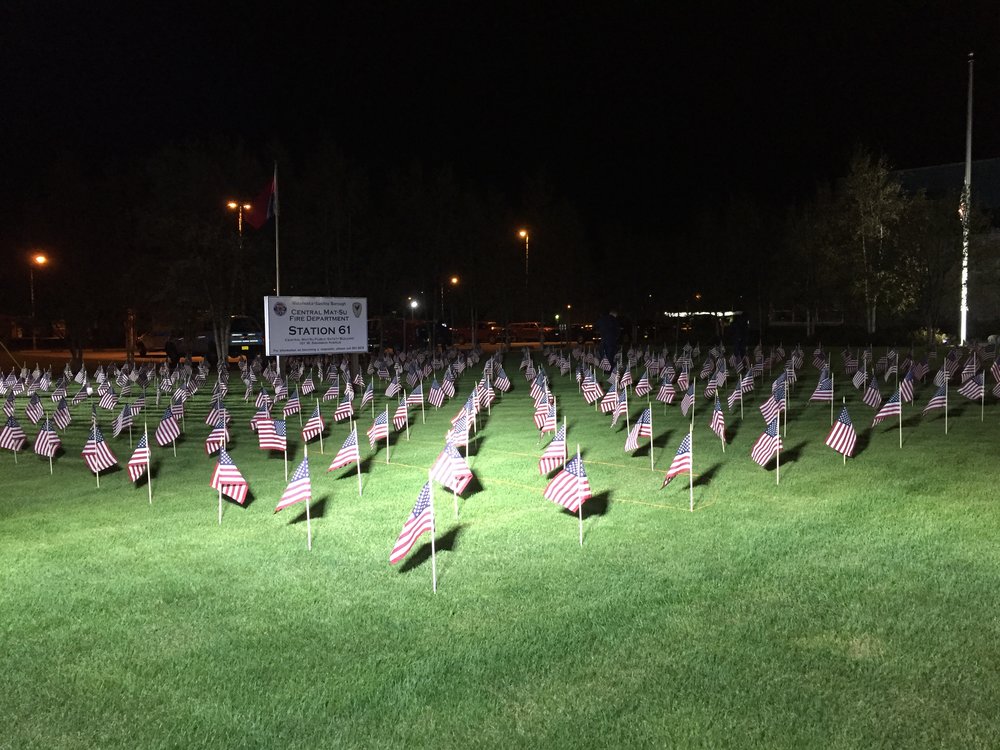 At Fire Station 61 in Wasilla 343 flags stand in honor of the 343 firefighters who gave their lives on 9/11 that others might live.

I stood silently in the early morning hours as we awaited the moment (5:58am Alaska time) when the first tower fell, and thirty minutes later (6:28am) when the second tower fell. We marked each with a long and heartfelt moment of silence. By the time the second tower fell on the morning of September 11th, the Pentagon had already been burning for almost an hour.

Standing next to me was my father-in-law, a city cop for more than 30 years. All around us in the darkness were fellow firefighters from the Mat-Su, who come together each September 11th to honor the sacrifices that were made that day. For a brief moment I was transported back to Sept 14, 2001 at West Point, the night we held silent vigil for all who had been lost that week.

For my West Point classmates and I, 9/11 provided a moment of clarity. Some of my classmates lost parents in the attack on the Pentagon. Some traveled the forty miles to Ground Zero and searched for survivors amid the rubble. All of us knew with certainty that upon graduation we would be heading oversees for wartime deployments, and that some of us would not be coming back. That knowledge provided us the time to consider what we would be fighting for, and whether it was truly worth the cost. Not every soldier is afforded that opportunity.

G.K. Chesterton perhaps captures best what many veterans have learned through experience: “The true soldier fights not because he hates what is in front of him, but because he loves what is behind him.”

You do not climb to the 78th story of the World Trade Center with 100 lbs of firefighting equipment without knowing what you are fighting for. You do not put yourself in that place by accident. You choose to go there, and then you train hard so that when duty calls, you are prepared to answer that call.

It was to honor the sacrifice of men like Ronald Bucca and Orio Palmer, two firefighters who gave their lives on the 78th floor of the South Tower, that Congress awarded the highest honor Congress can bestow, and established September 11th as Patriot Day. Today, we honor the memory of those who perished, and the heroism and courage of those true patriots who came to their support, and to whom our nation owes so much.

Their actions were noble. Those who have succumbed to the poison of political correctness cringe from such an acknowledgment, if they even acknowledge Patriot Day at all. They would rather focus on victims and victimhood than on acts of courage and heroism. A society of victims is easier to reshape according to a politically correct mold, than a society of Americans exercising personal responsibility, grateful to their heroes, and empowered to pass on that heritage to the next generation.

It is examples of courage and true heroism that we need most today. Heroism inspires bravery in even the most unlikely of places, and leads us to act with greater courage than we thought we had. We do not honor heroism to inspire our heroes to act more heroically. We honor heroism because it is a noble thing, and for the effect that it can have on the faint of heart among us. Endless stories of victimhood, on the other hand, inspire only passivity and inaction.

On 9/11, Ziad Samir Jarrah and 3 other Al-Qaeda terrorists hijacked Flight 93. They chose the date September 11th with care, intending to destroy either the White House or the U.S. Capitol Building, and in so doing to help blot out the military defeat of Muslim forces at the Battle of Vienna on September 11th in 1683.

After subduing the unarmed crew, only one thing stood between the hijackers and their goal: the passengers.

To keep the passengers from getting in the way, Ziad Samir Jarrah made an announcement over the plane’s loudspeakers:

“Ladies and gentlemen: Here the captain, please sit down keep remaining seating. We have a bomb on board. So sit.”

He followed a little while later with a longer message:

“Ah. Here’s the captain; I would like to tell you all to remain seated. We have a bomb aboard, and we are going back to the airport, and we have our demands. So, please remain quiet.”

They chose not to.

Never forget, the White House and the U.S. Capitol still stand today because the men and women aboard Flight 93 saw through the lies, left their seats, and fought for their own lives and the lives of their fellow passengers. Today is the day we honor their memory, their courage, and their bravery.

Let the scoffers say what they will, but there is still much beauty in this country; in her people, in her history, in her Constitution, and in her heroes. It is love for each of these things that inspires true soldiers to continue to fight for her future despite the pundits who so loudly insist today that patriotism has gone out of style.