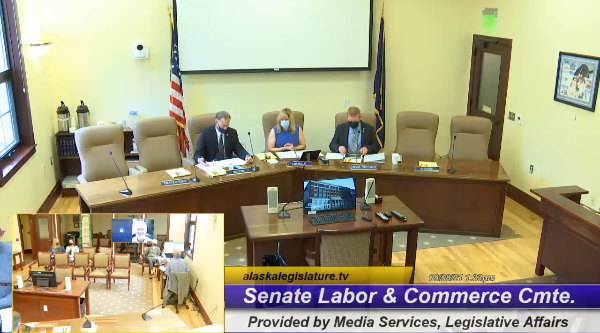 On Wednesday afternoon, the Senate Labor & Commerce Committee met to consider amendments to Senate Bill 3006, introduced by the governor on September 2nd.

The bill included one section, Section 3(c), which would have granted broad emergency power to the current administration, and was of concern to many.

Sec. 3(c): Notwithstanding any other provision of law, beginning from the effective date of this Act and until July 1, 2022, the commissioner of health and social services may waive any state law or regulation if compliance would substantially prevent or impede the provision of health care services under this section. Nothing in this subsection may be construed to abrogate authority granted to the commissioner of health and social services under AS 18.15.390.

Thank you very much to those who drew attention to this section. The effect of this portion of the bill would be to grant legislative power (the power to suspend any state law) to the current administration for the next ten months.

During Tuesday’s meeting of the Senate Labor & Commerce Committee, Senator Mia Costello highlighted this section. You can hear her comments here, beginning at the 18:35 mark.

In arguing for the bill, Commissioner Adam Crum explained that current law “…does not provide him [Governor Dunleavy] with the authority to draft, suspend or amend existing statutes [state law]. That role is left solely to the authority of Alaska’s legislative branch. This is why legislation is needed.” (you can find this here, at the 11:05 mark)

What he was describing as a design flaw of current law is actually a somewhat important feature of Alaska’s Constitution, which states in Article II, Section 1:

Our constitutional framers believed that the ability to make and repeal state law was so important that such a power needed to be dispersed between no less than sixty legislators elected by the people.

Inexplicably, this broad grant of power in the bill was omitted from both the written description of the bill, and the bill’s official title, which legislators use to quickly skim over the contents of a bill.

A big thank you to Sen. Costello for putting forward an amendment to remove this section of the bill in its entirety. You can find discussion of the amendment here, at the 41:05 mark.

Fortunately, the amendment passed and it will not be included in the current version of the bill.

However, also troubling is this language which remains in the bill:

“During a recognized federal or state public health disaster or emergency, the director may order health care insurers to waive utilization review requirements, including preauthorization requirements for medical services, concurrent review for inpatient hospital services, retrospective review of inpatient and outpatient services, emergency services and payment of claims, and requirements for placements of policy holders in post-acute facilities.”

While this is certainly more narrow than the broad language that was included in Section 3(c), this language seems to allow the director to engage in some of the same waiving or suspending of any current or future state laws or regulations that give insurance providers the right to use these tools as part of their business model.

While, as customers, we would all like to see things like preauthorization of medical procedures go away, it is one of the tools used by insurance providers to ostensibly keep costs down. If it should be banned by law, perhaps the legislature should debate passing such a ban before giving that power to the administration. If it shouldn’t be banned, companies should be able to continue to make such decisions for themselves.

As we enter an age where government wants to increasingly rely on emergency orders and disaster declarations to skirt state and federal laws, we must insist all the more that those in government are accountable to our laws, and that if a law is so onerous that it “needs to be gotten around”, then it is onerous enough to justify our legislators repealing it and, if necessary, putting a better law in its place.

We must never allow the rule of law to be sacrificed simply because bureaucrats are in a hurry, or legislators are lazy. It is much too precious for that.

Besides, do we really want such grants of power to be triggered every time the federal government declares any kind of public health disaster? The exceptions could quickly swallow up the rule.