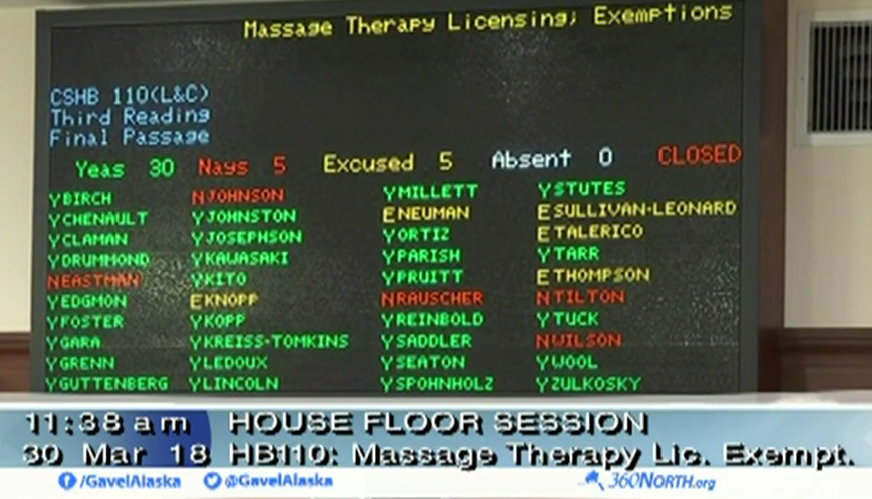 If you want to know why our state economy is having trouble keeping up with our government spending, there are two places you should look. And both of them were voted on by the House of Representatives on Friday morning.

Unfortunately, legislators voted both to increase the shackles on our struggling state economy and also to open the floodgates to increased government spending; a terrible combination both for Alaskans and for our economy.

Many Alaskans are already furious at the legislators who voted on Friday to cut $900 from the PFD and use that money to pay for state government.

That single vote removed the equivalent of as much as $1 Billion from Alaska’s struggling economy in an effort to prop up unsustainable state government spending.

The second vote that should interest every Alaskan is the vote shown above, when legislators voted to add further restrictions and barriers for those desiring to get a job in massage therapy here in Alaska.

Beginning next year, those who graduated from a massage therapy school that required 620 hours or less of training will have to go back and re-take massage therapy school, even if they have already been working in the industry for 20 years—if they move to Alaska and wish to continue their profession in this state.

Of course, for those who graduated from massage therapy school long ago, or who may be about to graduate from a school that requires only 620 hours, the message is clear: Don’t come to Alaska – We don’t want you here.

And this is how economies shrink.

While we are busy protecting current licensees from outside competition, those who would be coming to our state are forced to go elsewhere, and Alaskans end up with fewer and costlier choices when they are seeking therapy.

If you are a military spouse who has little choice in where the military sends you and your family, this is how you go from having a good paying job in Texas, to being unemployed or having to take on whatever part-time work you can find in Alaska.

Multiply this a hundred or even a thousand times across nearly every industry in Alaska, and you will get a feeling for why our economy is as small as it is, and getting smaller.

Yes, behind every regulation, behind every training requirement, behind every license the state refuses to issue you, there is someone arguing that fewer licenses somehow make us more safe.

It is important for Alaskans to see that, whether there is any truth in that or not, such regulations have the unmistakable effect of propping up crony capitalism, which limits competition, increases costs for everyone, makes it harder for Alaskans to find jobs, and harder for our economy to grow fast enough to keep up with an ever-growing state government.

If you want to know why our economy can’t keep up with the growth of government spending, this is why.