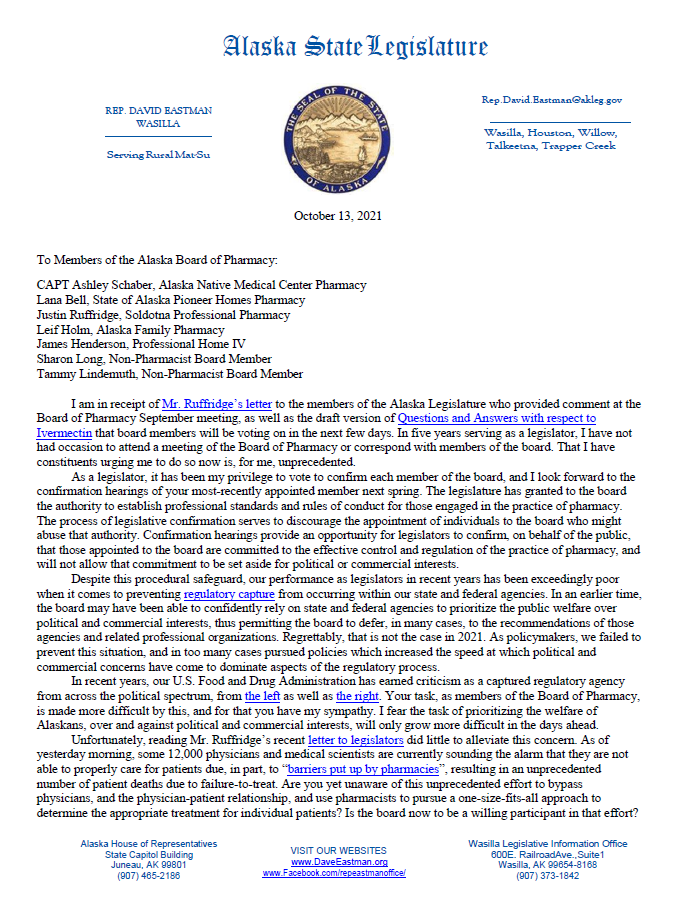 The complete letter can be read by selecting the link above.
The text of the letter is provided below for your convenience.

To Members of the Alaska Board of Pharmacy:

I am in receipt of Mr. Ruffridge’s letter to the members of the Alaska Legislature who provided comment at the Board of Pharmacy September meeting, as well as the draft version of Questions and Answers with respect to Ivermectin that board members will be voting on in the next few days. In five years serving as a legislator, I have not had occasion to attend a meeting of the Board of Pharmacy or correspond with members of the board. That I have constituents urging me to do so now is, for me, unprecedented.

As a legislator, it has been my privilege to vote to confirm each member of the board, and I look forward to the confirmation hearings of your most-recently appointed member next spring. The legislature has granted to the board the authority to establish professional standards and rules of conduct for those engaged in the practice of pharmacy. The process of legislative confirmation serves to discourage the appointment of individuals to the board who might abuse that authority. Confirmation hearings provide an opportunity for legislators to confirm, on behalf of the public, that those appointed to the board are committed to the effective control and regulation of the practice of pharmacy, and will not allow that commitment to be set aside for political or commercial interests.

Despite this procedural safeguard, our performance as legislators in recent years has been exceedingly poor when it comes to preventing regulatory capture from occurring within our state and federal agencies. In an earlier time, the board may have been able to confidently rely on state and federal agencies to prioritize the public welfare over political and commercial interests, thus permitting the board to defer, in many cases, to the recommendations of those agencies and related professional organizations. Regrettably, that is not the case in 2021. As policymakers, we failed to prevent this situation, and in too many cases pursued policies which increased the speed at which political and commercial concerns have come to dominate aspects of the regulatory process.

In recent years, our U.S. Food & Drug Administration has earned criticism as a captured regulatory agency from across the political spectrum, both from the left as well as the right. Your task, as members of the Board of Pharmacy, is made more difficult by this, and for that you have my sympathy. I fear the task of prioritizing the welfare of Alaskans, over and against political and commercial interests, will only grow more difficult in the days ahead.

Unfortunately, reading Mr. Ruffridge’s recent letter to legislators did little to alleviate this concern. As of yesterday morning, some 12,000 physicians and medical scientists are currently sounding the alarm that they are not able to properly care for patients due, in part, to “barriers put up by pharmacies”, resulting in an unprecedented number of patient deaths due to failure-to-treat. Are you yet unaware of this unprecedented effort to bypass physicians, and the physician-patient relationship, and use pharmacists to pursue a one-size-fits-all approach to determine the appropriate treatment for individual patients? Is the board now to be a willing participant in that effort?

In 2017, I cosponsored and took part in the development and final passage of House Bill 43, Alaska’s Right to Try Law. This law was passed to ensure that Alaskans at risk of death would have access to potentially lifesaving drugs, even when those drugs have not yet gained approval from the FDA. To facilitate this access, the legislature granted legal immunity to pharmacists who dispense investigational drugs that have not been approved for general use by the Food and Drug Administration. This law was passed to give hope to terminally ill Alaskans who desire to pursue potentially lifesaving treatment even when data on the efficacy of their preferred treatment is unavailable.

The current draft version of Questions and Answers with respect to Ivermectin is in direct conflict with the purpose for which we passed House Bill 43. Instead of honoring the right of terminally ill patients to pursue this medication, and the legal immunity granted in state law to pharmacists who dispense it, this document makes no mention of the legal immunity granted to pharmacists, and instead urges pharmacists to “strongly consider” withholding this prescribed medication from the patient. The document lists several “appropriate responses to patients” who have obtained a prescription for Ivermectin. Notably absent from this list is any response that involves the Alaska pharmacist actually dispensing the prescribed medication. Despite offering lip-service to the right of pharmacists to use their own judgment elsewhere in the document, this represents a one-size-fits-all approach to medicine that is fundamentally at odds with a system of healthcare based on individual Alaskan patients seeking and obtaining prescriptions from their doctor. In another time, such changes would have been left to the people’s elected representatives to debate through the legislative process.

It is no secret that members of Congress have been afforded the choice of taking Ivermectin, and hundreds in Congress have already availed themselves of that opportunity. I ask you, on what basis should Alaskans be deprived of access to the same medicines that are currently being used by their elected officials to treat and prevent the same illness?

The two leading antivirals either approved or under evaluation by the FDA for the treatment of COVID-19 are Remdesivir and Ivermectin. By way of contrast, the commercial price of Remdesivir is $3,120 for an average patient (the government rate is between $2,340 and $4,290 depending on the duration of treatment). The price of Ivermectin, on the other hand, has been found in some parts of the world to be as low as $1.80 for a 5-day course of treatment. The contrast between the effectiveness of these two drugs in reducing mortality in COVID-19 patients is striking.

On November 20th, the World Health Organization issued “a conditional recommendation against the use of remdesivir in hospitalized patients, regardless of disease severity, as there is currently no evidence that remdesivir improves survival and other outcomes in these patients.” This conclusion has been widely published and since received further confirmation (See Forbes: The Strange Story of Remdesivir, A Covid Drug That Doesn’t Work, and Journals of the American Medical Association (July 2021): Association of Remdesivir Treatment with Survival and Length of Hospital Stay Among US Veterans Hospitalized With COVID-19).

Despite substantial evidence that Remdesivir is not a lifesaving drug for treating COVID-19, the FDA has granted emergency use authorization for the use of Remdesivir. Additionally, the Centers for Medicare & Medicaid Services currently offers a substantial financial incentive to any hospital that uses Remdesivir for the treatment of COVID-19. Remdesivir is a well-documented example of a drug that is currently being prescribed by Alaska pharmacists for the treatment of COVID-19 despite a striking lack of evidence of its efficacy. Given the high cost of treating hospitalized patients with Remdesivir, and the financial incentives offered by the federal government for doing so, the financial interests behind the continued use of this drug to treat COVID-19 in Alaska cannot be ignored. It should also be acknowledged that when the FDA does finally approve the use of Ivermectin for the treatment of COVID-19, the Emergency Use Authorization justification for Remdesivir will be further weakened. I find it inexplicable that the board is now considering issuing a formal statement on the lack of efficacy of Ivermectin, but is utterly silent on the lack of efficacy of Remdesivir, despite the scant evidence of the former and the overwhelming evidence of the latter.

In his letter to legislators, Mr. Ruffridge states that there have been “multiple deaths/hospitalizations associated with Ivermectin use to treat COVID-19.” This data comes from which study? Attached to this letter is an expert review of the medical safety of Ivermectin authored by Jacques Descotes, MD, PharmD, PhD. After conducting an exhaustive evaluation of the available medical literature up to the beginning of this year, the author was unable to identify a single instance of death caused by Ivermectin. On the contrary, the report confirms that Ivermectin is safe for dispensing, and substantially safer to the human body than Aspirin.

In your draft document you link to a health advisory that cites a hospitalization after a patient drank a formula that included an Ivermectin drug for cattle. I am not aware of a single Alaska physician prescribing an Ivermectin solution intended for cattle (or any other animal) to a human patient.  Surely you are not encouraging pharmacists to decline to fill prescriptions for Ivermectin today because a drug for animals exists bearing the same name?

If the board means to prevent the consumption of a drug intended for animals, limiting a patient’s access to Ivermectin through physician-approved prescriptions seems a very counterintuitive way of achieving that goal. In discouraging pharmacists from filling prescriptions, the board may actually be increasing the likelihood of such consumption by Alaskans who respond by seeking their medication from unregulated sources. Such an outcome would undermine the effective control and regulation of the practice of pharmacy, the purpose for which the board exists today.

As an independent board with substantial statutory authority, Alaskans look to you to safeguard the public welfare regardless of the combination of political and financial interests that may seek to subsume it. I will be the first to acknowledge that this is no easy task, even in the best of times. And yet it must be done. Doctors and pharmacists in Alaska must be able to prescribe and dispense the very best medications and therapies for their patients, not have to consider whether the medicine they are about to prescribe or dispense is on a “politically correct” list. As members of the Board of Pharmacy, you are empowered to ensure that this is so.