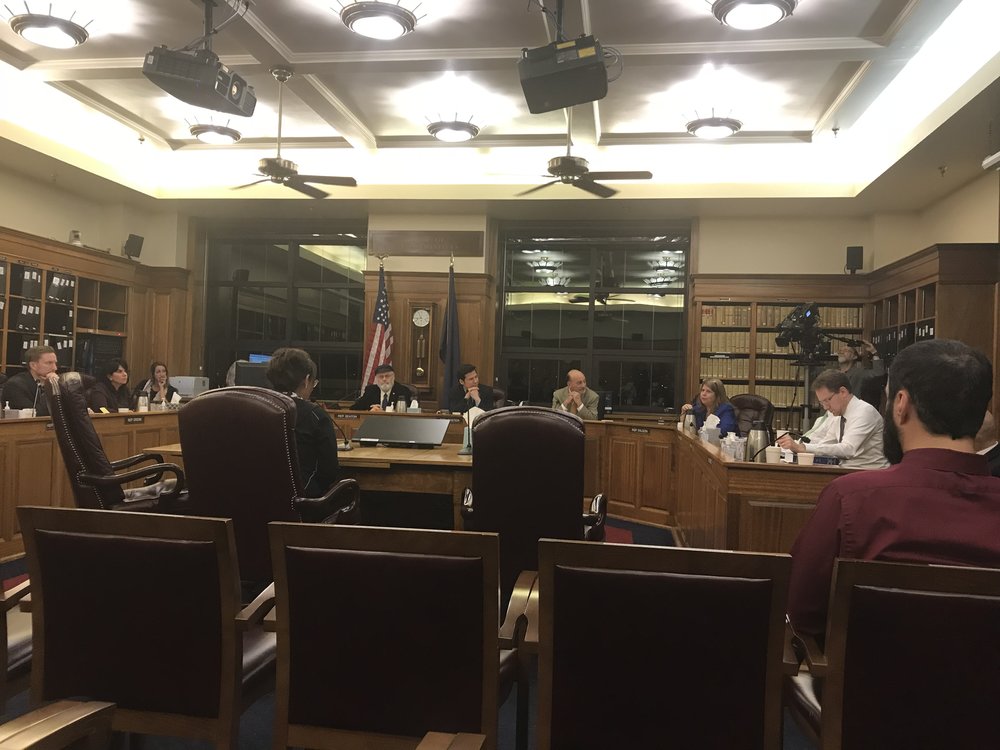 Legislators listen to a Juneau resident testify on the benefits of the SB54 crime bill.

“You never want a serious crisis to go to waste. And what I mean by that, it’s an opportunity to do things that you think you could not do before.” – Rahm Emanuel, Mayor of Chicago

In fact, in the 150 years since the United States purchased Alaska from Russia, there has never been a year the legislature met in session for 190 days. Until now. Today is the 190th day, and there are currently no signs of the legislature going home anytime soon.

But before you open up your wallets to fund a longer special session, remember how we got here. In July of last year, Governor Walker, against the protest of law enforcement groups from all parts of the state, signed SB91, triggering a reversal in our criminal justice system.

Even before the ink was dry on SB91, the writing was already on the wall. By signing SB91, Governor Walker, and his supporters in the legislature, ensured that crime would be a top issue on the minds of most Alaskans for the foreseeable future.

Remember also that SB54, which is currently being promoted as the solution to fix SB91, was of such little importance that it received no attention in the House of Representatives from the time that SB91 became law 16 months ago, until now. It received its very first hearing in the House only last week, and it would not have received even that first hearing if the governor hadn’t added SB54 to the current special session as an afterthought.

Remember also that the governor did not include SB54 in the call for his first special session, or his second special session, or when he first announced that he would be calling his third special session. This is how you ensure a crisis is good and hot before you take the lid off. Start an experiment that you know will fail. Then sit on even minor fixes, like SB54, literally for months.

To say that SB91 took the “justice” out of our criminal justice system likely hits closer to home than proponents of SB91 would like to admit. In any case, our system is now oriented around criminals, and what makes their lives better and easier.

It was discovered that jail has a bad effect on criminals’ lives, so sentences were reduced for almost all crimes.

It was discovered that criminals did not have enough incentives to obey the law after breaking the law, so additional “carrots” were created, to make it “pay” to obey the law.

It was discovered that too many criminals end up in jail in the first place, so steps were taken to identify more criminals as “low risk” in order to prevent them from ever entering jail the first time.

In other words, additional barriers and hurdles were placed in front of prosecutors, judges and police officers to make it harder when they try to take someone off the street and put them behind bars. The new process now requires more work on the part of all involved; more arrests on the part of police officers, more crimes on the part of the criminal, more paperwork on everyone’s part, more evidence that a criminal is going to commit additional serious crimes, etc.

SB91 also created a new system for judging whether someone should be kept behind bars. Those who have been arrested are now to be ranked low-risk, medium-risk, or high-risk, and judges are required to treat them accordingly.

In order to make it harder to put people in jail, we now require a judge to find someone “low risk” regardless of how many crimes they have committed in other states (or the severity of those crimes). If you committed murder in another state, but you haven’t committed a sufficient number of crimes in Alaska, you are going to be found “low risk”. For some Alaska crimes, that means the judge has to put you back on the street, and is not even allowed to impose bail, regardless of how many crimes you have committed before being arrested in Alaska.

To ensure that we aren’t putting anyone in jail who doesn’t absolutely need to be there, our new system also requires that someone be found “low risk” regardless of the crime(s) they are charged with.

If you are charged with murdering at least 59 people and injuring at least 527 others, as in the case of the Las Vegas Shooter, our new automated risk assessment system will spit out a label of “Low Risk”. Why is that? Well, in the case of Stephen Paddock, it’s because he hadn’t previously been convicted of a felony. Under our new system, risk is not based on your criminal history in other states, or the crimes you have been charged with. It’s based on other things, like whether or not you showed up for your trials in the past.

This, by design, puts a greater burden on prosecutors and judges to work harder to find creative ways of keeping bad guys off our streets. Instead of just having to arrest a criminal one time, you may have to arrest him several times, and watch him be released immediately each time, before that criminal ever sees the inside of a jail cell. This new system of course will require additional resources for law enforcement ($$$), for probation officers ($$$), for parole boards ($$$), for treatment centers ($$$), etc., etc. It is a big government solution, with all of the predictable supporters along for the ride.

SB91 was about hope and change. It had the effect of giving hope to criminals and to those who work to care for them. Nothing wrong with that. But it did so at the expense of everyday Alaskans, by taking the hope that they had of being able to live and work in safety in their communities. Instead of simple wealth redistribution, SB91 also accomplished hope redistribution. Now we hear daily of Alaskans who are afraid to go out into their community, afraid to walk to their cars after work, afraid of what is happening in the church parking lot during service, and who now find themselves having to invest in firearms and home security systems, etc., etc. Their hope has been taken, so that it could be experienced by someone else.

If public testimony is any indication, SB91 has largely pitted criminals, their family members, and those who work for the criminal justice industry, against everyday Alaskans. That divide should never have been allowed to form.

SB91 was an experiment. Whatever the good intentions of its original supporters, we now know it as an experiment that is fundamentally and unavoidably unjust. For this reason, it should be repealed.

As a big government solution, SB91 created hope that some members of society would receive additional resources that do not yet exist. It was fundamentally dishonest to promote those hopes, when the underlying resources those hopes rely on are not yet available, and may in fact never be available in the quantities actually needed.

Resources going to treatment are, by definition, resources that are not going someplace else. Much of the hope behind SB91 centered on shifting resources from corrections to treatment. But when the time came to reduce the budget of the Alaska Department of Corrections, the administration resisted each and every amendment put forward by my colleagues and I to do exactly that. By holding on to the money that could have gone to treatment, and previously vetoing $5 million of the money for treatment that made it through the budget process last year, the Walker administration indicated that it had other priorities. This is another way that governments create and fuel crisis, by withholding resources until a portion of the people truly are desperate.

Perhaps you are desperate enough at this point to support an income tax. Not that desperate? Well, just wait a little while. I know a governor who has been waiting three years now for you to come around.

This crisis will resolve one of two ways. Either the people will become more tolerant of big government solutions (with the price tags and longer legislative sessions that go along with them), or they will become less tolerant of these proposals, and will turn against both the Walker Administration and its supporters in the Alaska legislature.

At this point, I don’t see a third option.