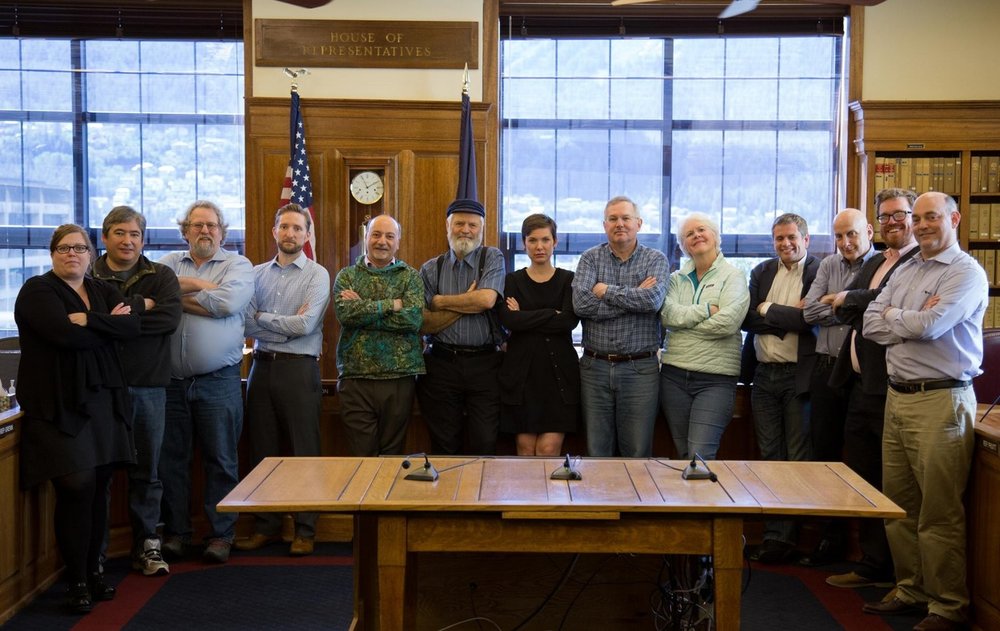 Let’s first talk about where we are today, and then what to do about it.

According to a recent Dittman poll, 58% of Alaskans also oppose an income tax.

45% of the Alaska House has steadfastly opposed an income tax from Day 1.

No matter, House Democrats, with a razor-thin majority cobbled together with the help of turncoat Republicans, have demanded an income tax, and they aren’t budging. It’s “tax or bust”, and the Democrats are now putting the breaks on the legislative process, even to the point of setting aside the Alaska Constitution, until they get their way on a tax.

To curtail heel dragging on the part of politicians, current state law (AS 24.05.150) requires that the legislature immediately adjourn after 90 days. No exceptions. This is not an arbitrary or inconsequential deadline. While the delegates to Alaska’s Constitutional Convention granted the legislature the ability to call themselves into session as often as necessary, and to be well compensated for their work, it has always been understood that time away from jobs, families and communities is incredibly difficult for legislators and for their staff. The longer the legislative session drags on, the more that families, employers and communities suffer because of it.

At a certain point, legislators who do have jobs and families to return to, often cave to the demands of those who don’t. This is especially true of commercial fishermen, whose livelihoods afford few opportunities to be in Juneau during the summer months. Of course, legislators who are retired and can afford to own homes both in Juneau and in their home district come out on top. Those represented by legislators of more humble means, who find themselves paying rent in both places, often do not.

For these and others reasons, more than 117,000 Alaskans voted that all future legislative sessions would have to be completed within 90 days. No one debates the existence of the law. And yet the legislature spent 121 days in regular session this year, and House Democrats would have spent more, if Republicans had not refused to give them the votes to continue.

To speed the process along, state law (AS 24.05.150) also requires (as mandated by our state constitution) that neither the house nor the senate may recess for more than 3 days without first gaining the concurrence of the other body. However, House Democrats dispensed with that requirement on Friday and recessed for more than 4 days, abandoning even the pretense of a meeting during that time. Shortly after the house recessed, the senate followed suit.

As if to reinforce their message, Democrat Leadership in the Alaska State House announced today that they have not scheduled any meetings during this week’s special session. They had publicized a committee meeting this week to discuss climate change. But that’s now been cancelled.

On Friday, we will gather for another house floor session, but as there was nothing on the agenda for today’s floor session, it is doubtful whether there will be anything on the agenda for Friday’s session either. Of course, by Friday morning, pink slips will have been mailed out to between 10,000 and 20,000 state employees, in what is now becoming an annual tradition here in Alaska. Welcome to what is, effectively, Day 134 of the Legislative Session!

How did we get here?

Let’s review some of the milestones:

Today is Day 13 of the current special session. The Constitution empowers the governor to call special sessions in cases of emergency. But with five special sessions called during the last legislature alone, and the process already beginning to repeat itself again this year, are we really dealing with emergencies, or are we simply dealing with neglect on the part of some of Alaska’s political leaders?

If you are wondering how legislators have been able to cope with being together in Juneau for the past 134 days of non-stop legislative sessions, the short answer is: They haven’t had to cope, because they have found a way to avoid having to work or even attend meetings together during session. In the first 13 days of the current special session, the House has so far conducted business on only two occasions, despite the constitutional obligation to meet at least once every three days. In fact, most all of the meetings for this special session have so far been non-meetings; where nothing is on the agenda, no business can be conducted, and the majority of legislators are not in attendance. Even so, politicians can point to the fact that some members met, which technically satisfies the letter of the Constitution, hence the name “technical session”. Through long recesses and the use of technical sessions, the House has been able to avoid conducting any actual business since May 22nd.

Interestingly enough, in 1956, the delegates to the Alaska Constitutional Convention debated whether or not it was conceivable that these very same delay tactics could be used by future legislatures. On January 10, 1956, the question was asked: “…but what is to prevent either house from…having a recess for three days…then meeting again and then immediately taking another recess for another three days?” The question was answered directly: “I can answer Mr. Robertson’s question as to what would prevent it. The newspapers would prevent it.” And perhaps at one time they did. But when you give politicians an inch…you may very quickly discover they have taken quite a bit more than that.

In 1978, 75% of Alaskans voted for the legislature to limit the legislative session to 120 days or less.

Because of this, and other years like it, in 1984, the people of Alaska voted (more than 3 to 1) to amend the state constitution to limit future legislative sessions to 120 days, with the option of a one-time, 10-day extension. The constitutional amendment also required the legislature to adjust its internal deadlines to accommodate the new timetable. But after more than 30 years now, those deadlines have yet to make it past the drafting phase.

In 2006, Alaskans again took to the ballot box and passed a state law limiting all future legislative sessions to no more than 90 days.

As astute Alaskans will have no doubt already observed, legislators now have a well-developed habit of extending sessions past 90 days. In fact, when you add up all the days that the legislature was in session in 2015, it lasted 157 days. If you are thinking that might have been an anomaly, the total in 2016 was also 157 days.

Did legislators change the law to permit the longer sessions? Actually, no, they didn’t. They left the 90-day session law on the books, and simply choose not to look at it. This year marks the 6th time the legislature has chosen not to look at the law.

Once the constitution’s 130-day limit kicks in (which the legislature and the courts have defined as 130.99), the legislature has found it necessary to enlist the help of the governor, who has been only too willing to call as many special sessions as necessary until the legislature passes his agenda.

And now, after ignoring the legal requirement to end in 90 days, after sidestepping the constitutional requirement to meet at least once every 3 days, after stretching legislative sessions to 157 days each of the last two years, and setting aside working on the budget for the first half of the current special session, we now come to a point where the house and senate are each using the threat of a looming government shutdown to attempt to put pressure on the other body.

If you are thinking to yourself, “this can’t end well”, you’re right—it isn’t likely to.

Advocates for increased spending on the part of state government are continually preaching “fiscal crisis” to the public. What that usually means is “more money from the private sector to keep the government sector happy”. Unfortunately, as my old commander was fond of saying: “I’ve seen that movie before and I know how it ends”. It ends with a smaller state economy, the rationing of some government services, and less to go around for everyone.

We should never have gotten here. The legislature should have instituted the deadlines required by the constitution as soon as the amendment was ratified in 1984. But now that we are here, I look forward to working with other legislators, and any members of the public who are so inclined, to draft and implement those deadlines. Now that we’re here, the legislature should submit some of the most contentious questions to the people, to appear on the ballot at the next election. Bequeathing the future of the PFD to the perpetuation of state social programs is a decision that the people have a direct stake in. They should have a voice in that discussion, and we should carefully consider what they have to say about it.

Taxes won’t do anything to satisfy or curb the endless appetite of government. Government will always be able to consume more money than we can produce as a state. Without a functional spending limit in place, taxes will only speed up the transfer of wealth from those who work in the private sector to those who work in the public sector. No tax increases. It’s already hard enough to make a living without the state taking an even bigger bite out of hardworking Alaskan families.