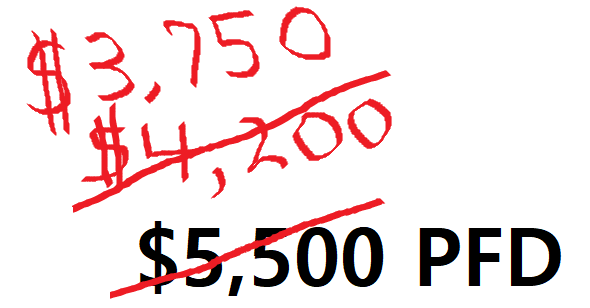 In the past, legislators, like the rest of us, had no idea what the amount of the PFD was going to be when they voted on the state budget. There was no amount in the budget, just a blurb about following the law and a reference to the state statute. Legislators found out how large the PFD was going to be in October, like the rest of us, because it was based on the performance of the Permanent Fund.

Now, following the law isn’t good enough anymore. Legislators want to decide the amount. And now so does the governor.

$3,750 is the amount the governor included for the dividend in his proposed budget and budget supplement this year.**

$5,500 is the amount of the dividend passed by the Alaska State Senate in House Bill 281 on Tuesday.

So, here is where things sit currently:

The State House now appears ready to pass House Bill 281, which includes the $5,500 dividend. One would think that doing so would settle the matter, and result in a $5,500 dividend in October. Unfortunately, Republican legislators have teamed up with members of the Democrat-led Caucus, and have a very different plan in mind.

After the legislature passes the budget it goes to the governor and he can veto (cut) whatever portion he chooses. He cannot add to the amount of the dividend, but if past precedent under Governor Walker is any indication, he can veto the dividend down to $0 and will have support from the Supreme Court if he chooses to do so.

Ironically, support for vetoing part of the dividend isn’t coming from just the Supreme Court. It is also coming from a majority of Republican and Democrat legislators. Even while many legislators are promising to vote in favor of a $5,500 dividend, they are giving their support for the governor to use his red veto pen on the PFD as soon as it passes the legislature. In other words, they will block any attempt on our part to override the governor’s veto.

Already, we are hearing the spin doctors starting to push the mantra that “the budget doesn’t actually include a $5,500 dividend” so that Dunleavy will be able to veto some portion of the PFD and then say afterwards that he didn’t actually “veto the dividend” like his predecessor, Bill Walker.

However, a $5,500 PFD doesn’t sit well with the powers that be in Juneau, including some in the Governor’s Office, so we are starting to hear all sorts of creative excuses (i.e. spin) for why Dunleavy can and should veto part of the PFD.

One of the things we are hearing is how, since oil and gas prices are high today, this is exactly like what happened when Sarah Palin was governor and the legislature sent out an energy rebate check that wasn’t actually part of the PFD. Again, hogwash.

In 2008, Governor Palin proposed distributing a $1,200 check to Alaskans for energy cost relief. That was through House Bill 4001. In HB4001, the legislature took great pains to makes explicit that the “$1,200 resource rebate” was not part of the Permanent Fund Dividend. In fact, it went so far as to create a separate program in the Department of Revenue called the “Alaska Resource Rebate Program” to distribute the rebate to Alaskans. The money was never sent to the Dividend Fund (the account that pays dividends) and was intentionally kept legally separate from the Permanent Fund Dividend.

That was not by accident.

The choice to include something in the Permanent Fund Dividend has tremendous financial and legal implications for the state and for many Alaskans who receive the PFD.

One of the legal consequences of including, or not including, a payment in an individual’s Permanent Fund Dividend is due to Alaska’s PFD “Hold Harmless” Law (AS 43.23.240). State law requires that state agencies “hold harmless” and ignore income from the Permanent Fund Dividend when calculating eligibility for public assistance programs. The law also requires the state to provide additional cash payments to individuals to offset any federal benefits an individual stands to lose due to their PFD income (since the feds do not exempt the PFD when determining eligibility for federal programs).

In short, the state is required by law to ensure that no Alaskan is negatively impacted due to receiving income from the PFD. Since more than 272,000 Alaskans currently receive some form of public assistance from the state, whether money is considered part of the Permanent Fund Dividend has huge ramifications.

Another significant impact of money being included in the Permanent Fund Dividend is garnishments. Thousands of Alaskans currently have their PFD garnished for one reason or another. If your PFD is garnished, any money included in your PFD doesn’t actually go to you, it goes somewhere else (often to the state or federal government).

They could have passed a $4,200 PFD and a $1,300 energy rebate like they did under Governor Palin. They didn’t do that, and it wasn’t an accident.

Another dodge you may hear is that the governor only asked the legislature for this year’s dividend, so he should veto anything the legislature passes that is greater than this year’s statutory dividend. It sounds nice, It just doesn’t have any basis in reality.

Governor Dunleavy has repeatedly told the public that the legislature should follow the law and that he supports restoring previously withheld dividends to the people. Last month, I again put forward the proposals to include backpay in this year’s budget. Unfortunately, the proposals to distribute backpay for withheld dividends in 2020 and 2021 each died on a 17-22 vote in the house.

If the governor vetoing any portion of the dividend sounds reasonable to you, just remember that less than four months ago the governor was singing a very different tune. At the start of the legislative session in January, his official budget request to the legislature included backpay for last year’s dividends. You can find it on Page 8 of the supplemental budget request he submitted to the legislature. He requested $795,609,508 ($1,231 per individual) in backpay for those who received a partial dividend last year.

Setting aside the spin, some time in the next few days legislators will likely vote to pass a $5,500 PFD, but the majority of those voting for it will have already pledged their support for the governor to cut it once it reaches his desk.

For Juneau, it is a win-win. Legislators who want to pander to constituents who have been asking for the $5,500 dividend will be able to do so knowing all the while that they have ensured it will never happen. And legislators who want to pander to the special interests who have been urging opposition to the $5,500 PFD will be able to do so by claiming credit for helping convince the governor to use his red veto pen, just like Governor Walker did, to cut a PFD that is larger than he is comfortable with.

If pressed, the governor and legislators in Pro-PFD districts who supported vetoing part of the PFD will likely try to point the finger at other legislators in the state house for not supporting the $5,500 PFD passed by the senate. Fundamentally, what this entire charade accomplishes is to draw attention away from the fact that Alaska’s budget just ballooned yet again, and that a Republican governor again found it easier to work with a handful of Democrats to veto the PFD than to work with those few conservatives in his own party who have been urging him to use his veto pen to cut government largesse, end state funding for things like abortion, and leave the PFD alone.

And this is why Alaskans hate the legislature.

There are 18 days left to file for office. Even one more conservative voice in Juneau could (and likely would) have an incredible impact. Please consider it.

** Note: $3,750, like the other numbers referenced above, is an estimate based on the sum of two very large numbers, $1,680,283,550 ($2,600 per individual for this year’s dividend) and $795,609,508 ($1,231 per individual who received a partial dividend last year). It is never known exactly how many individuals will apply for a dividend in a given year, or how many of those who do apply will be found eligible. I personally estimate the number to be $3,831 based on the projection that 646,263 Alaskans will receive a permanent fund dividend this year. However, the Legislative Finance Division has published $3,750 as the official number so I am going with their official estimate here.