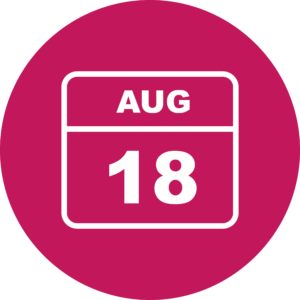 If you are waiting for anyone heavily invested in the status quo to tell you when you have your best opportunity to change that status quo…you could be waiting a very long time.

This Sunday (July 19th), is the last day for Alaskans to register to vote or update their voter registration. It’s easy. You can do it online. Want to register the old-fashioned way? Find instructions here.

So what makes the election on August 18th so important?
Well, it’s simple. Republican voters outnumber Democrats roughly 2-to-1 in Alaska. Statewide, we know that more Republicans are going to get elected.

August 18th will determine whether those Republicans are more like Lisa Murkowski, or more like Mike Dunleavy.

Therefore, if our state legislature is going to get a course correction on the PFD, the Binding Caucus, Red Flag laws, or any other state-level issue, it will happen on August 18th.

In times past, if someone was running as a Republican candidate you might not have known everything about their politics, but at least you knew they weren’t a Democrat. No longer.

It may seem strange, but under current state law, if Mark Begich wanted to change his voter registration and run as a Republican, there is actually nothing the Republican Party could do to stop him.

If he wanted to personally identify as a Republican on the ballot next month, he could do so. So could every other Democrat candidate.

Voters tend to vote for whatever label they are most comfortable with. They do so even when they have nothing in common with the candidate actually wearing that label.

The Republicans know this. So do the Democrats.

The Democratic Party recently celebrated a campaign event for one of my “Republican” colleagues in the legislature, Rep. Gary Knopp. He was a life-long Democrat…until he decided to run for office…as a Republican. 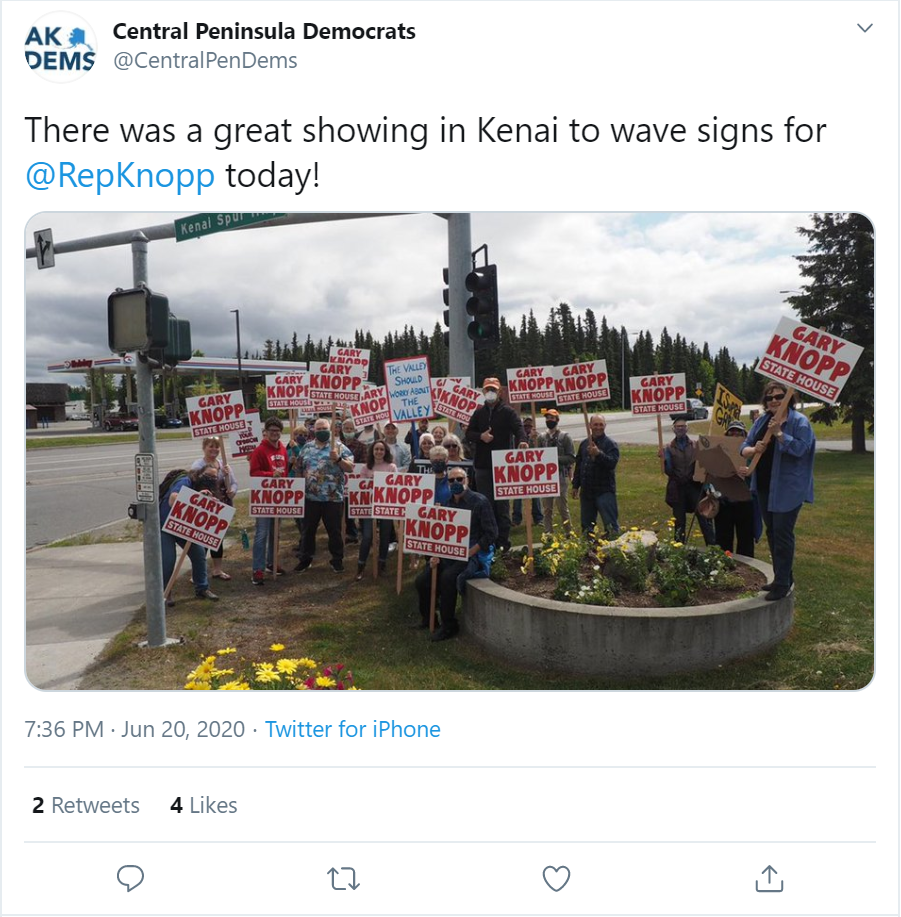 This year, the Republican Party asked him not to run as a Republican candidate.

Knopp told them to pound sand.

Because he won the August election in 2018, he wears the Republican label. And when he is in Juneau he is counted as a Republican legislator, even though one of his publicly stated political goals is to oppose Dunleavy’s conservative agenda.

And from his position as a “Republican” legislator, he works to ostracize Republican legislators like myself, often saving his harshest criticism for me personally.

And why does he single me out?

Well, remember when Knopp and other “Republican” legislators handed control of the State House to the Democrats two years ago?

I was the first legislator to make it crystal clear that I would not be selling my district’s vote to the Binding Caucus that Knopp had envisioned.

Many of the voters who sent me to Juneau were the same voters who elected Mike Dunleavy. The idea of selling my district’s vote so that “Republicans” like Gary Knopp could then use it to “Resist Dunleavy” was a non-starter for me.

Honestly, if I had signed on to the Binding Caucus, the voters in my district would have roasted me alive…and with good reason.

Binding caucuses serve one function…to “bind” legislators into voting against conscience and against those they were elected to represent. I promised my district that I would never join a group like that.

As the only representative from the Mat-Su on the House Judiciary Committee, I promised my constituents that I would not sell them out when it came to repealing SB91. Even though it meant taking a ton of flack from fellow legislators, I kept that promise. 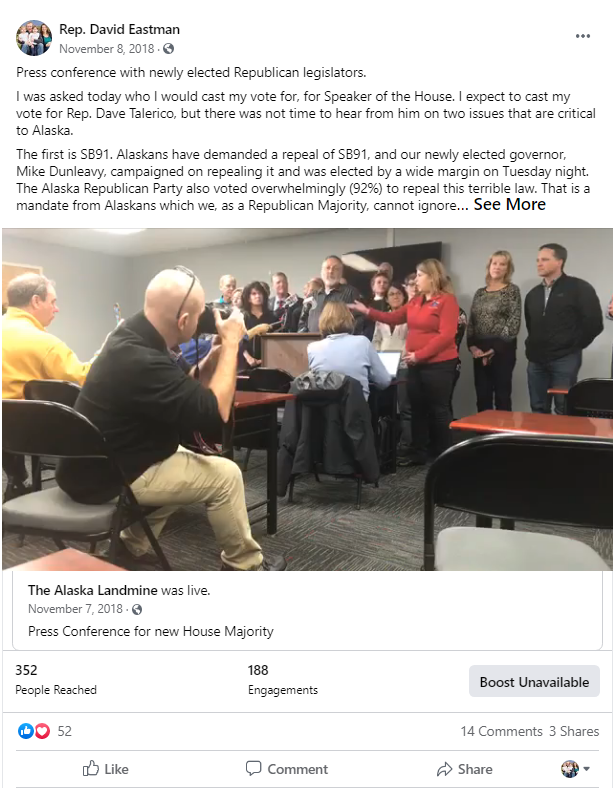 When it came time to walk the talk, I was the one Republican who refused to put my name to a blank check. I was offered a committee chairmanship and was asked to parade myself in front of the cameras as a loyalty pledge to the caucus. I was told they would decide if it was a Binding Caucus…..after the fact. I was told they would figure out a lot of things, like whether we would protect the PFD, or repeal SB91…later.

In politics, once they have your vote, “…later” means “never”, especially when the caucus is led by ardent defenders of SB91 like Chuck Kopp, opponents of the PFD like Jennifer Johnston and Lance Pruitt, and Binding Caucus apologists like Gary Knopp.

I couldn’t do that.

I was invited to sign onto a blank agenda, with the leaders of my caucus openly working to make it a Binding Caucus. I declined.

In the end, several legislators who opposed Dunleavy’s agenda left the Republican camp and turned over control of the Alaska House of Representatives to life-long Democrats like Rep. Bryce Edgmon, who were more than willing to sign on to their Binding Caucus.

Of course, to cover over what they were doing, they convinced Edgmon to first change his voter registration to “Undeclared” so that they could later say that they weren’t actually giving control of the Alaska State House to a “Democrat”.

Even so, it was clear to Republican voters what they had done.

They had run as Republicans, and even described themselves as “conservative“. But they were not being honest with voters. 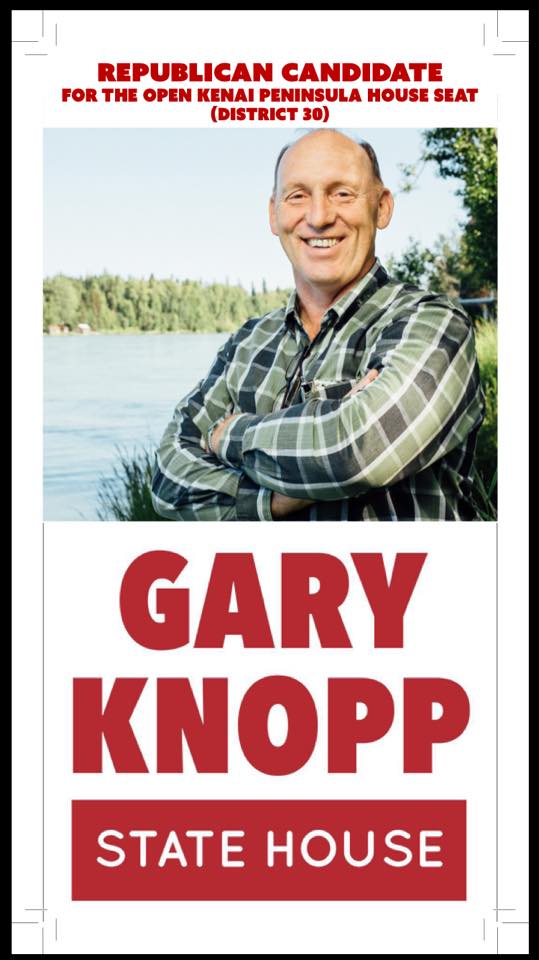 Today, Gary Knopp is fighting for his political survival, along with several of the Republican legislators who worked with him to put the Democrats in power two years ago. It turns out that giving control of the legislature to Democrats is not especially popular to voters in strongly Republican districts like the one Knopp represents.

Of course, it wasn’t supposed to turn out that way.

Knopp and his allies had planned to lead the opposition to Dunleavy’s agenda from the relative safety of a “bipartisan” Binding Caucus that would have included conservative districts like mine. As the leaders of that caucus, they would have expanded its ranks to include enough Democrats so that it could be used as a weapon against the governor and against those I was elected to represent.

As participants in a “bipartisan caucus”, they would have been able to credibly blame any failure to support Dunleavy on the Democrat leaders in the caucus: “We tried to support the governor, but those darn Democrats…” And while certain of their key donors would have known the truth of it, their anti-Dunleavy agenda would not have been exposed publicly, and they would not now be fighting for their political survival.

That’s why Knopp levels his harshest criticism at me. And that’s why the Swamp is up in arms today.

Once I said “NO!” to selling my district’s vote to the Binding Caucus, Knopp had to go and publicly seek support from his true political allies….Democrat legislators and the Democratic Party.

One picture that is especially memorable from the events that took place last year, was when Gary Knopp ran for Speaker of the House and received 20 votes; his vote, and the votes of every member of the Democrat Caucus.

Fortunately, even with every member of the Democrat Caucus voting for him, he was still one vote short.

At the time of the vote, he was writing eloquently about the need for “Bipartisanship” in the legislature. But it was never about bipartisanship. It was always about opposing the conservative policies of a newly elected Republican governor.

Should any of us have been surprised?
When Bill Walker left office, legislators like Gary Knopp lost their biggest ally. As long as Walker was in office, they could vote for the occasional conservative policy with complete confidence that, if it ever passed out of the legislature, Walker could immediately veto it.

When Mike Dunleavy was elected governor, all that changed.

We saw the same pattern emerge when Trump was elected president.

The reshuffling of the Alaska Legislature two years ago, while disappointing to many Republicans, was a very predictable response to the election of a conservative governor. Legislators opposed to his conservative agenda had to readjust their battle lines to face the new threat. New alliances had to be made. And old friendships broken.

How ironic, that Knopp and his allies in the legislature now point the finger at conservative legislators like me, for the fact that they voted to give control of the Alaska State House to the Democrats.

Does it pass the smell test? Not by a long shot. But they will continue to do it, and continue running as “conservative Republicans” as long as Alaskan voters permit it.

And as long as they do, Alaskans will keep electing Republican majorities in the legislature and scratching their heads when conservative policies, and conservative legislators, continually get kicked to the curb.

Tuesday, August 18th is the day Alaskans can change all that.