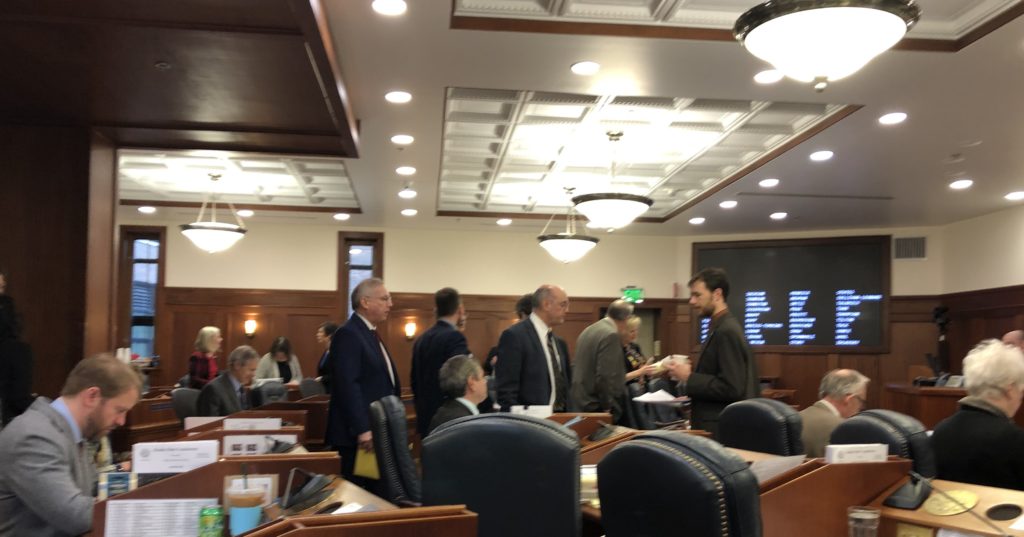 When Mark Twain wrote “No man’s life, liberty, or property is safe while the legislature is in session” he probably wasn’t thinking in physical terms. But then, politicians in all parts of the world can usually be counted on to look out for number one without much coaxing, so he probably didn’t think it would ever become an issue. But here we are.

My office ceased in person meetings on March 10th.

My staff was released to work from home on that date.

My last public event in district was two weeks ago.

When I must attend a legislative floor session, I wear a mask at all times. In both the House and in the Senate we have legislators approaching 80 years old. If one of them should become ill, I don’t want to have to wonder “Did I cause that?”. I also have a duty to those I care for to take every reasonable step to avoid getting sick myself, and passing on a contagious disease. Does a mask wreck photo-ops? Yep. Is my family, and anyone else I might be caring for in the coming weeks, worth it? Yep.

A brief survey of legislative bodies throughout the country shows that we stand alone in Alaska:

One has to wonder what it is about Juneau that is different from all other states. Not only are we continuing to meet every day, but we also have no back-up plan for when the legislature needs to conduct business and legislators refuse (or are physically prevented) from traveling to a central location. Other states have created such contingencies. Alaska legislators are still thinking about it. Or rather, the five or six legislators who control the legislature are thinking about it (or not).

The big news in the capitol building yesterday was that the legislative lounge is no longer allowing legislators to sit down and eat meals together. The lounge is still open, and legislators can still grab a meal, but since yesterday they have to take it with them. Other than that, and the public being prohibited from entering the capitol building, business has continued on, more or less as usual, since session began in January.

On the agenda for this evening’s floor session is a 123-page bill dealing with regulations on the alcohol industry. Earlier today we issued a posthumous award to a soldier stationed at JBER and created a task force on therapeutic courts.

Yesterday, we passed bills on COVID-19, mining, medicaid and raising the age to purchase tobacco from 19 to 21. Yesterday we also passed regulations on car dealers and board members of insurance companies.

This is Juneau. Impervious to the outside world.