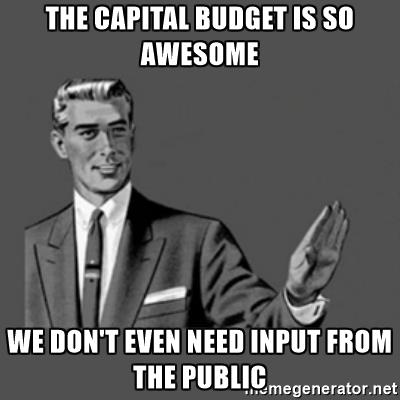 Alaska legislators are voting today on whether or not to pass the state capital budget….without input from the public, and without an opportunity to read the bill. It’s a recipe for ensuring that the “most important” special interests get their demands met, and everyone else gets to find out about it afterward. Is this really what twenty-first century democracy has come to in Alaska?

For those who have not yet heard, ADN announced this morning that legislators are being encouraged to vote on whether or not to call another special session so that a budget agreed to by leadership can be passed. Unfortunately, details of the budget are not to be available until next week when legislators are to meet in Juneau. Once in Juneau, legislators will take an official (public) vote to pass the budget.

I want my constituents to know that I will not be giving my vote to this plan for the following reasons:

First, I have not been able to read the bill. Without access to the bill, my staff and I are unable to evaluate it and I am unable to communicate with my constituents about what is in the bill and receive their input on whether or not it should be passed.

This process is not what the people of Alaska consented to. It erodes Alaskans’ confidence in our political process, and undermines the ability of the people to engage in self-government. Fundamentally, it denies that it is the public’s money that we are talking about spending, and instead treats our state budget as a joint savings account owned by 60 legislators and the governor. It is not.

I have also made it clear to everyone in the legislature who has asked me, that I will not be voting to fund government projects on the backs of the people while the government continues to prevent distribution of the full PFD ($2,280 per Alaskan under current state law). As legislators, we do not have the right to set aside state law to fund special interests over the people.

If the legislature wishes to change the law which determines the amount of the PFD they may do so, but I am not at all convinced that doing so would be in the best interest of Alaskans or the Alaskan economy.

Further, the legislature has already spent 180 days in session this year. They had every opportunity to pass a capital budget in the 90-day session approved by the people and enshrined in the Alaska Constitution. They chose not to do so.